Another edition of Openexpo in Winterthur is over and I owe you a (not so) short report:

Eckhart, Andi and Adriaan held a booth for KDE, Mark and Sven were manning the Amarok one and I tried to be at both the KDE and Kubuntu booth during these two days. This was made quite easy by the organizers as they arranged the three booths around the same pilar we shared with the guys from the Swiss OLPC Team.

While Andi could only attend the first day (thanks again, Andi, for helping us, it was really nice meeting you!), Adriaan was also wearing his FSFE/FTF hat and was busy with attending talks, FSFE and Swiss FOSS meeting and getting in touch with a lot of Swiss activist, especially during the second day. He sometimes found a little time to show KDE running on OpenSolaris and talk about the pilars of KDE and brought some very yummy Dutch cookies. Eckhart held the KDE flag steadily, selling swag, showing 4.3.1 and handing out CDs (we had Kubuntu 9.04 and Fedora KDE Live Media kindly provided by the Fedora guys from the booth right in front of us). He even found some time on brainstorming about how to improve the booth to make it better despite the little space and prevented the table from getting too much cluttered with empty water glasses, paper and such. Great work, Echkart, as usual! I sat somehow between the KDE and Kubuntu booth (actually the booth of the official Swiss Ubuntu LoCo Team), showing KDE 4.3.1 on my laptop to give people some taste of what they could expect for the next release. The Swiss Team was present with Manuel and Roman on Wednesday, Dirk and Dani on Thursday (since Dani helped out a the OOo booth on the first day) and Nick was the nice guy who attended all two days! He really deserves a special Thank You for his patience and expertise 🙂 It was also a nice occasion to meet Dirk, who is usually helping out the German team and took his Thursday afternoon off to give a hand. 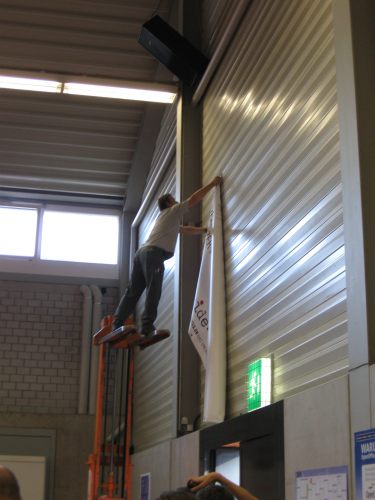 Despite the ongoning economic crisis, the event was nice although very noisy, with good catering and the organizers did a lot to make us comfortable (thanks again to Hannes and the two Matthias from ch/open !). The adjacent business event called Topsoft was focusing on the same themes as usual, ERP and CRM, with big booths, suits and ties everywhere, expensive flyers and buzzwords. They even had Brazilian dancers on the first evening “apéro” 🙂 But even without the big money, we had a lot of fun on our side and were greeted with a yummy supper at the social event, listening to some lightning talks (where Sven presented the Darker Radio Charts available as a script in Amarok) and making new acquaintances. Add to that the Free Beer which made us all quite happy 🙂

The evening of the second day was topped by a gathering of about 20 Free Software activists in a Spanish bodega with very good tapas and some beer and sangria in Zürich. So sad Eckhart had a train to catch and couldn’t join in, but we will repeat that on the next occasion, promised. How about Openexpo in Spring again?