Since Mark of Amarok fame is living here, people in the house are in awe about the man sitting in front of his desk all day long, “programming computers”. Of course, we have been asked a few times to give a hand in choosing hard- or software, until now only to manage one dual install and a helping hand to install proprietary software…

A few weeks ago, our neighbor, a fifty-something housewife, asked us to have a look at her rather new computer making strange noises and refusing to boot. Of course, this was the ideal moment to try what we first thought to end up with a dual boot:

It was not only impossible to boot with the installed Windows XP, but all attempts to repair the existing installation were vain. Wild guess, total infection as she used the Internet without almost any protection, a very likely scenario. So, what to do? Either reinstall first Windows, then Linux and make the traditional dual boot for newbies, adding tons of firewalls and anti-virus tools. Else, convince the lady that she could continue to use her computer as before with mostly Free Software and get rid of the Windows part, a far easier choice for us who don’t use Windows at all since quite some years, but what about her? She put all her trust in our affirmation that Linux was a far better choice for her. I should add that she is by no means an expert user but also a beginner in the Windows field, so there would be quite some knowledge building. 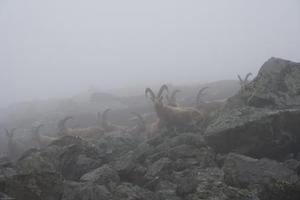 Bold move, we didn’t hesitate long and decided to install Kubuntu in the Intrepid Ibex flavor, with a all shiny new KDE 4.1.2 desktop. Yes, I know, it is still beta and one shouldn’t do that, but we live in the same house and Mark would in the worst case have been the daily emergency repair man and instructor.

Here are the needs: mailing, some text processing, some basic image manipulation and, most important, Skype with video to keep contact with her family abroad. Languages would be German as system language, quite unfamiliar to us as we both use an English installation and Polish to keep the computer usable for the husband who is not as fluent in German as she is.

Long story short, we installed everything and configured a basic installation with Kubuntu Intrepid Ibex beta and KDE 4.1.2. We did no particular hardware configuration except for the wide screen which turned out to be actually a flat TV and this went in a dash after we set up the 1440×900 specification. The HP color printer was recognized auto-magically, same for almost all the hardware, except for the Canon 4400 F scanner that turned out to be totally unsupported by SANE. The most tricky was actually to install Skype with video support and gave us an evening of headaches, the Logitech camera with built in microphone accepting either only the sound input or the video one. Some two hours of tuning the sound settings (K Mix REALLY needs more usability!) later we managed to make it work with an external headset and suggested to buy a headset, anyway nice to have for late night phone sessions. Oh surprise when after a reboot both camera and built-in microphone worked, and have ever since.

Now, two weeks later I did an update of the language packages, we still have an awful mix of German, Polish and mostly English as the Canonical folks are sadly behind schedule with language packs, the lady managed to nuke the panel and unfortunately it’s not possible to add it at the bottom as it stubbornly decides to turn up at the top of the screen. Moving .kde/ to .kde-old/ and restarting did the trick. I still have to figure out how to activate desktop effects with the Radeon-HD driver, some residual fglrx (installed by default, such a shame) probably preventing the run (it did for the older radeon driver on my laptop).

But, on the bright side, she was able to use Skype almost all the time with both sound and video, used text processing and the next step will be to install Krita for image handling which she is very keen of and bringing her my old HP Scanner I don’t use anymore.

Overall a nice demonstration of how Mom-compatible both Kubuntu and KDE4 already are, enabling a computer newbie to use her computer without those “horrible beeps” and restarts she experienced before. She doesn’t miss Windows at all and say that it’s far more beautiful and not more difficult now than before 🙂