update 16:00: Steve Jobs answers to my open letter, see below. 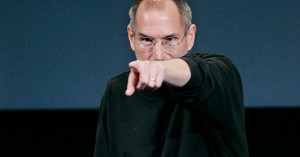 Having read your Thoughts on Flash, I could not agree with you more. Flash is not the Web, and I am glad Apple seizes the opportunity of open standards to build better products for their customers.

But I am not so sure about your definition of the word Open in general. I will not argue here that it is ironic you find the Apple Store more open than Flash. I will not complain either that you like Openness so much that when you use “Open Source” Software to build your Mac operating system, you keep all the openness for yourself and don’t give it to your customers, nor to the developers whose works have been very useful to you.

I figured that writing an open letter was an appropriate way to remind you of a couple of things that you may have forgotten — maybe in good faith — about open standards.

It is true that HTML5 is an emerging open standard, and I am glad that you adopted it (well, did you really have the choice anyway?). However I have to say I am impressed in the way you succeed in saying how Apple has been doing great with open standards against Flash… while explaining Flash videos is not a problem, because Apple has implemented another video codec: H.264.

May I remind you that H.264 is not an open standard? This video codec is covered by patents, and “vendors and commercial users of products which make use of H.264/AVC are expected to pay patent licensing royalties for the patented technology” (ref). This is why Mozilla Firefox and Opera have not adopted this video codec for their HTML5 implementation, and decided to chose Theora as a sustainable and open alternative.

Free Software Foundation Europe have been raising consensus and awareness on Open Standards for some years already. I am sure we would be happy to help Apple make the good decision. So, to begin with, here is the definition:

An Open Standard refers to a format or protocol that is

All video codecs are covered by patents. A patent pool is being assembled to go after Theora and other “open source” codecs now. Unfortunately, just because something is open source, it doesn’t mean or guarantee that it doesn’t infringe on others patents. An open standard is different from being royalty free or open source.

Sent from my iPad

Since it was an open letter, I think I have the right to publish his answer.