On November 9 2016, I and my son Johannes left Denmark for Brazil in order to co-organize and attend the II International Festival of Technoshamanism. You can read more about the background for this festival at the technoshamanism site as well as in previous posts on this blog.

Each participant in the festival was expected to propose an activity, and as one of the organizers I was no exception. The II International Festival of Technoshamanism took place in the Pataxó village Pará in the extreme south of the Brazilian state of Bahia, and my proposal was to install a working node (mucúa) of the Baobáxia system in the village. The purpose of this node is to act as an archive of the indigenous cultural production, a way yo protect and salvage the indigenous culture in electronic form for decades to come, and a way for the Pataxó to do so with complete ownership over the infrastructure as well as the content – independently of corporate and proprietary content-sharing sites such as Facebook and YouTube.

Who are the Pataxó?

Well, I’ve written about them before, after I participated in the first technoshamanism festival in 2014. The Pataxó are an indigenous people (what we sometimes call “Indians”, indeed they sometimes call themselves that) who live near the sea in the extreme south of the Brazilian state of Bahia. The Aldeia Pará (Pará Village) is located in what the Pataxó call their origin or Aldeia Mãe, the area from which they were all expelled in the massacre of 1951. It is situated far from everything in the middle of an indigenous reserve comprising some 8500 hectares and is home to some 69 families. The neighboring village of Barra Velha is located 5 km from Pará and has a population of about 400 families.

The Pataxó are an intelligent and open-minded people, and though they have not had much exposure to computers, they are very conscious of the potential of modern technology in the struggle for their culture and their land, which has been a constant factor in Pataxó life for several decades – not least given that many of their villages are threatened by expulsion. In October 2016, the village of Aratikum some 100 kilometers north of Pará was actually razed to the ground by the police in the service of local land owners.

The Pataxó’s motivation for hosting the event was to be able to exchange knowledge – to learn something from all us urban hackers and activists with our experience in free software and art and social movements, and to teach us something in the bargain. Each participant would propose an activity – a workshop, an art installation, a ritual, a performance, a talk – and would be free to participate in the other proposed activities. Among the activities proposed by the Pataxó were the festival’s opening and closing rituals, a healing tent, traditional Pataxó cooking, traditional body paint, fishing and hunting methods, the cultivation of manioc and manufacturing of manioc flour, musical sessions and the jogos indigenas, the indigenous sports games which took the form of a competition between Indians and non-Indians.

As I said, my proposal was to install a node of Baobáxia and – just as, or even more, important – give workshops in how to use and maintain the system (running on a dedicated Debian GNU/Linux server) themselves so it could be useful also after we left.

Technoshamanism, ancestrality and the Destructor

But if the Pataxó’s motivation for hosting the event was to make friends and allies and gain new knowledge, then what was our motivation for organizing it? And by “we” I mean a large group of people in the technoshamanism network, mainly but (obviously enough) not exclusively Brazilian: Fabi Borges, Jonatan Sola,  Sue Nhamandu, Rafael Frazão, Fernando Gregório, Luiza Só, Rodrigo Krul and too many more to mention, apart from the many participants who arrived at the festival with similar motives and gave many outstanding contributions?

One thing is the connection of technoshamanism with reconnection  – reconnecting with the Earth, reconnecting with the ancestral worldviews of the thousands of generations of people who lived close to the Earth in a mainly oral culture. The Pataxó live in a reserve where they can live well off the earth, they have a strong connection to their ancestral way of life as well as, quite literally, to their ancestors and other ancestral spirits, who often show up at their rituals.  As such, the Pataxó have 500 years of experience in dealing with European colonizers and the usurping civilization, and they have developed an immense skill in navigating this kind of pressure without losing neither their independence nor their traditional culture.

As opposed to that, the norm in our cities is that of disintegration, not least of community spirit and ancestral culture. Traditional songs and tales which might have been handed down in subtly changing ways for hundreds or thousands of years are replaced with comic books and cinema, which are replaced with endless children’s TV shows, which as we grow up are replaced with “breaking news”, X Factor and a host of even more diluted and inane TV shows. Culture ceases to be something we do ourselves and do together, neighborhoods cease to be communities and the cultural divide even splits up the families, so that we end up as disjoint individuals in a sea of strangers who can only struggle to recreate something vaguely resembling a genuine community. Sometimes, of course, as in the case of many successful free software projects, genuinely succeeding.

In his recent novel “Jerusalem“, the  writer and comic book author Alan Moore metaphorically describes this phenomenon, which he has experienced first hand in his home town of Northampton, as “the Destructor”. The Destructor was a garbage incinerator which for decades was actually and physically located in the poorest neighborhood in Northampton, reducing people’s life expectancy with at least ten years, its location a daily reminder to the inhabitants of the Boroughs of how little the rest of the city cared about them.

And yet the Boroughs was actually the oldest neighborhood in Northampton and home to a bafflingly rich, orally transmitted ancestral working class culture which was, after World War I and under the impression of the Russian revolution, deliberately crushed by city planning. According to Alan Moore, the policies which have disempowered modern Europeans by stripping us of our communities were deliberately inflicted. Moore describes the destructive effect on the communities with these words:

He saw a hundred old men and old women moved from the condemned homes where they’d raised their families, dumped in distant districts with nobody that they knew and failing to survive the transplant. By the dozen they keeled over on the well-lit stairs of their new houses; in the unfamiliar indoor toilets; onto their unprecedented fitted carpets; on the pillows of magnolia-painted bedrooms that they failed to wake to. Countless funerals fell into the Mayorhold’s fires, and furtive teenage love-affairs, and friendships between relocated children sent to different schools. Infants began to understand that they would probably now never marry the classmate they had been expecting to. All the connecting tissue, the affectations and associations, became cinders. (p. 731)

The Northampton neighborhood known as the Boroughs descended into complete misery and insecurity, containing the points of trade that “supplied the customers who drew the girls, who brought the pimps, who dealt the drugs, which bred the guns that shot the kids who lived in the house that crack built” (p. 691). But there’s a point in that – that kind of misery is very common in urbanized Brazil as well as in Europe, and a contact with people who still retain an orally transmitted culture and whose communities were never fragmented by the Destructor could teach us something about reconnecting, with the Earth and its spirits, with our natural spirituality and with true community.

As we arrived in Pará about November 14, our first job was to establish a good contact with the Pataxó, organize food for the event and start rigging the computers and other technical equipment.

As everybody else, we were camping in what was at first quite precarious conditions due to the heavy rainfall before the festival started. 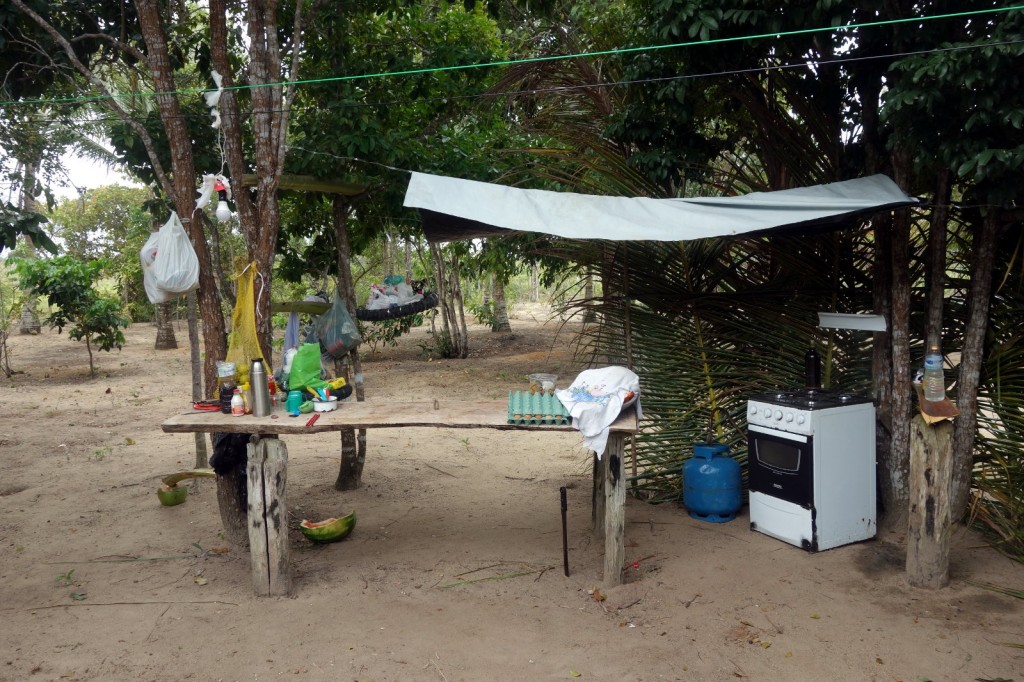 Luckily, the Pataxó were very helpful and we managed to secure everything against the rain before the start of the festival on November 22. 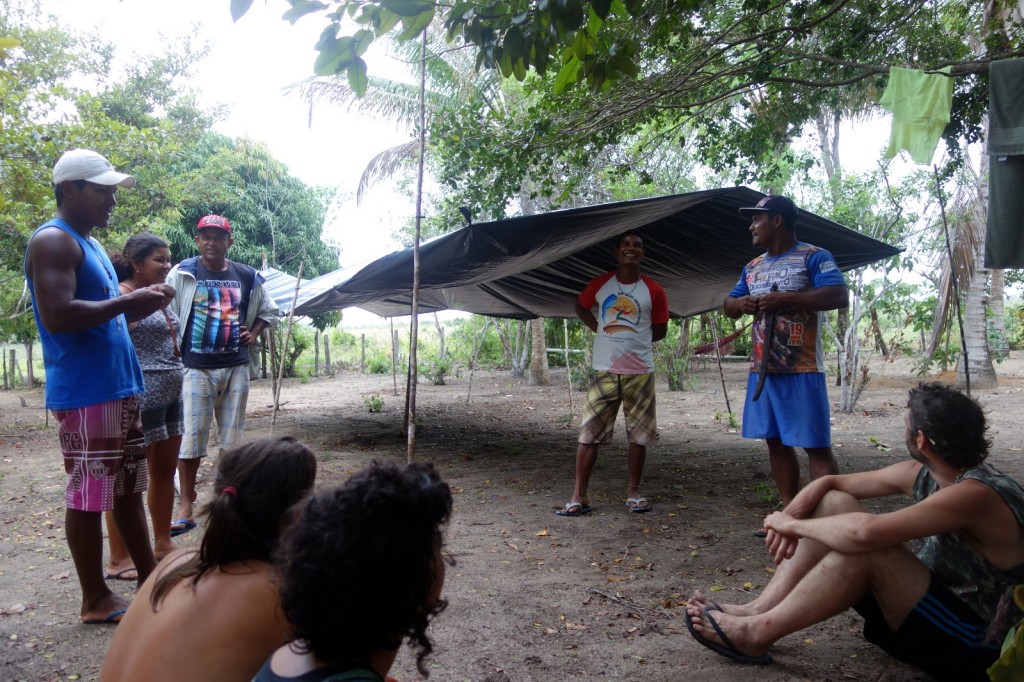 Before our arrival, the Pataxó had built a completely new house for cultural production, in which they had placed four stationary computers they had received from the reservation’s Fisherman’s Association which originally got them from a government program. These four computers were quite old and had Windows installed. Our first task was to replace that with GNU/Linux.

At first, our attempts at setting up the computers were haunted by technical difficulties. First of all, we were unable to get them to boot from USB drives, which meant we had to buy burnable CDs or DVDs. When we got them, we realized they could not really boot from the DVDs either due to our images being 64 bit, and these trusty old computers were actually 32 bit. We couldn’t use the Internet for troubleshooting since there was no Internet yet – it was supposed to arrive during  the week before the festival, but the roads were closed because of the rain.

In the end, Pablo Vieira from the Assentamento Terravista near Ilhéus (with the microphone in the picture above) arrived, and as it turned out, he knows these computers very well; they can boot from USB if a rather obscure BIOS setting is enabled. In his pocket was a bootable USB with the most recent 32 bit Linux Mint, and everyone was happy and the computers were well prepared for the arrival of the Internet later that week.

I was not alone in the task of installing Baobáxia and giving workshops about it – Vincenzo Tozzi from the Mocambos network, Sicilian and founder of the Baobáxia project, joined the festival as well. Vince is a programmer and computer scientist and wrote a major part of the Baobáxia system himself, but he is really a philosopher of networks with important insights in the potential of free software and offline digital communications, and his presence was an invaluable contribution to the festival.


Our two workshops in Baobáxia were a huge success, and especially the younger generation of the Pataxó showed a great interest in working with this technology. The Baobáxia node we installed is still active in the village and is still not connected to the Internet, but you can see the contents in its present degree of synchronization here.

What else was in the festival?

A lot of things. 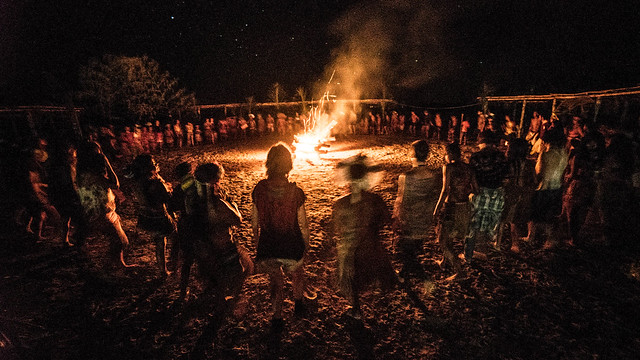 And video workshops, radio workshops, capoeira, samba in the church in honor of Saint Benedito, seed exchange, agroforestry, construction of dry composting toilets, radio production, discussions about the pros and cons of ecoturism, and much, much more. I might do a followup post on that, in the meantime let it be said that the festival was a unique experience and I’m very happy to be one of the people who made it happen.