While spring and early summer are claiming Berlin now and most folks are out enjoying the change, I thought I’d post a late winter picture. 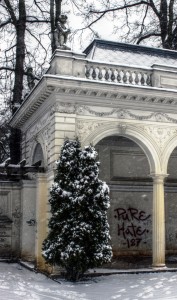 People who know me, know that I am more of a winter person, so I usually have pictures of winter or fall around when the sun shines too bright outside. This picture was taken about two months ago in Pankow, Berlin. It is an HDR rendering made of three individual shots using Luminance HDR and the Mantiuk06 algorithm. Color and Contrast were corrected with digikam.

I like the way the different elements in the picture contrast each other… the classical architecture and the graffiti; the coziness of the christmas-like tree and the cold wind… it somehow doesn’t want to fit together and still does.