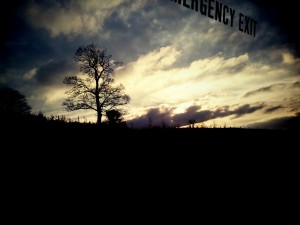 Here’s the picture that is used in the header and which inspired the title of the blog. The picture was taken with my transformer pad through the window of a bus, in Northern Ireland, last fall. I ran it through some filters of the android image program, not much was done on the computer.

I kind of like the sound of »emergency exit«, and it fits with the picture. You are stuck in a place that isn’t  good for you — but things aren’t hopeless, there is a way out. Can be understood as a allegory on our society in general or the Software world or whatever the viewer might see in it.

Then again the picture has a more gloomy touch to it, the sky that is inscribed with “EMERGENCY EXIT” (or at least parts of the words) and symbolising salvation is distant and unreal, the viewer remains in darkness and the surrounding world as well. Both, the vignetting effect applied to the picture and the fact that there is glass between the viewer and the scene create a separateness that hints at the possibility that you might actually not reach the emergency exit in time.