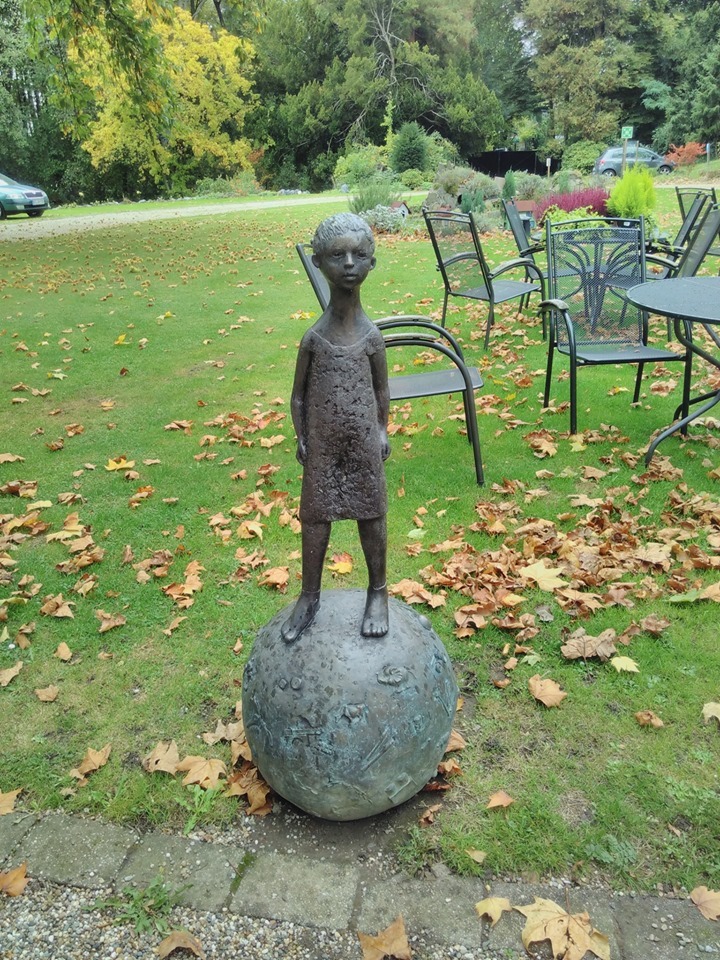 In October 2019, I went to Linuxhotel in Essen, as I had been invited to attend that year’s General Assembly in the FSFE as a prospective member. I had a very enjoyable weekend, where I met new people and renewed older acquaintances, and it was confirmed to me what good and idealistic people are behind that important part of the European free software movement.

On the photo you see Momo, the character from Michael Ende’s eponymous novel – a statue which I was delighted to see, given that “Momo”  has been one of my favorite children’s novels for decades.

I first met the concept of free software at the university, as a student of physics and computer science in the early nineties. As students, we had to work on  the old proprietary SunOS and HP-UX systems; we had to use the Emacs editor and GNU C compiler (thanks, Richard Stallman and GNU team!) as well as the LaTeX text processing system (thanks, Donald Knuth and Leslie Lamport!)

Some of my fellow students were pretty interested in the concepts of free software and the struggle against software patents, but not me – to be honest, at the time I  was not interested in software or computing at all. Computer science to me was mainly algorithmics and fundamental concepts, invariants and termination functions (thanks, Grete Hermann!) as well as Turing machines, formal languages and the halting theorem (thanks, Alan Turing and Noam Chomsky!). The fact that computer programs could be written and run was, I thought,  mainly a not very interesting byproduct of these intellectual pursuits. In my spare time I was interested in physics as well as in topics more to the “humanities” side – I spent a lot of afternoons studying Sanskrit and Latin and, at a time, even biblical Hebrew, and read Goethe’s Faust and Rabelais’ Gargantua and Pantagruel in the original languages. My main, overarching interests these years were art in the widest sense, epistemology (specifically, the epistemology of physics) and the history of religon. I also read a lot of comic books and science fiction novels.

After leaving the university, however, I got a job as a developer and worked mainly with internal software at a huge corporation and with proprietary software at a major vendor to the newspaper industry. It was at that time, in 2005, that I once again stumbled over the concept of free software – as explained by Richard Stallman – and started using GNU/Linux at home (Ubuntu, thanks, Mark Shuttleworth, Ian Murdoch, Linus Torvalds, Ingo Molnar and everybody else involved in creating Ubuntu and its building blocks Linux and Debian!)

I suddenly realized as someone that had become interested in software and its potential impact on society, that Stallman’s analysis of the situation is correct: If we want to build society’s infrastructure on software – and that seems to be happening – and we still want a free society, software must be free in the FSF sense – users, be they individuals, public authorities or corporations, must have the four freedoms. If this is not the case, all of these users will be at the mercy of the software vendors, and this lack of transparency in the public infrastructure may, in turn, be used by governments and corporations to oppress users – which has happened time and time again.

Free software enables users (once again – be they governments, companies or actual people) to protect themselves against this kind of abuse and gives them the freedom to understand and participate in the public infrastructure. By allowing changing and redistributing software products it also reverses the power relations, giving the users the power they should have and ensures that vendors can no longer exploit monopolies as their private money printing machines (no thanks, Microsoft, for that lesson !)

After discovering the concept of free software and the fact that I could practically use free software only in my daily existence, I started  blogging and communicating about it – a lot.

In 2009, a friend of mine started the “Ubuntu Community Day”, an initiative to further the use of Ubuntu in Aarhus, Denmark, and give back to the community that created this OS.

As such, in 2010 we helped co-found Open Space Aarhus, along with a group of hardware hackers. After some years, this group petered out, and I had discovered the FSFE and become a Fellow (that which now is called Supporter). As such, I was more interested in addressing real political work for free software than in Ubuntu advocacy (as good a path as this is for getting people acquainted with free software), and in 2012 I started an FSFE Local Group in Aarhus, with regular meetings in the hacker space. This group existed until 2015, where we co-organized that year’s LibreOffice conference (thanks to Florian Effenberger and Leif Lodahl and everyone else involved!) but ended up stopping the meetings, as I had become busy with other, non-software related things and none of the other members were ready to assume the responsibility of running it.

As mentioned, when I discovered free software, I was in a job writing proprietary software. While I could live with that as long as the salary was good and i was treated well, making a living from free software  had become not only a dream, it now seemed to be the best  and possibly the only ethically defensible way of working with software.

It also became clear to me that while we may admire volunteer-driven and community-driven free software projects, these are not enough if software freedom is to become the accepted industry standard for all software, as is after all the goal. Some software may be fun to write, but writing and maintaining domain-specific software for governments and large corporations to use in mission-critical scenarios is not fun – it is work, and people will not and cannot do it in their spare time. We need actual companies supplying free software only, and we need many of them.

After some turbulence in my employment, including a period of unemployment in the wake of the financial crisis in 2009, in 2011 I joined my current employer, Magenta ApS. This is the largest Scandinavian company producing only free software – a software vendor  that has never delivered any product to any customer under a proprietary license and has no plans to do this either, ever. With 40 employees, we are currently selling products to local governments and similar organizations that used to be the sole province of huge corporations with shady ethical practices – and I’m proud to say that this means that in our daily jobs, we’re actually changing things to the benefit of these organizations, and of Danish society at large. (Thanks to Morten Kjærsgaard for founding the company and being its motor and main driving force for all these years!)

And in the FSFE General Assembly  of 2020, I was confirmed as a permanent member of the GA. I’d like to thank the founders of the FSFE and the community around it (too many to list all the names, so y’all are included!) for this confidence and hope to be able to continue contributing to free software, a cause I discovered 15 years ago,  for at least the next 15 years as well.