Yesterday, I went to the protest in Barcelona against the incarceration of the leaders of Omnium and ANC, two important separatist movements.

The Catalan question is complex, and there are lots of opinions on all sides. However, after speaking with a lot of people down here and witnessing a quite large demonstration – as shown in these photos – it seems clear that Catalan nationalism is *not* about excluding anyone the way Danish racism and British UKIP-ism is.

After all, Catalonia has been an immigration destination for years, and people are used to living together with two or more languages, with family members from all over Spain. The all-too-familiar right-wing obsession with Islam and the “terror threat” is conspicuously absent from Catalan politics.

And it’s not all about language or regional identity, as many Spanish-speaking people with origins in other parts of Spain wholeheartedly support Catalan indepence.

Rather, it’s about a rejection of and rebellion against the Spanish state which is seen as oppressive and riddled by remnants of Francoism. The slogans were radical: “Fora les forces d’ocupació”, “out with the occupation forces!” and “the streets will always be ours!”

Indeed, for many of the young people it seems to be about getting rid of the Spanish state in order to implement a much more leftist policy on all levels of society – as one sign had it, “we’re seditious, we want to rebel and declare indepence and have a revolution!” First independence, afterwards people will take charge themselves, seems to be the sentiment.

“The people rules and the government obeys!” – is another slogan. The conservative forces behind Puigdemont (the current president) may have other ideas, but for now these are the people they have allied themselves with – people who actually believe in the direct rule of the people themselves. Looking at the people present in the demo, it’s clear that it’s a really broad section of society – old and young, but everybody very peaceful and friendly. There were so many people in the streets that it was getting too much, some especially old people had to be escorted out through the completely filled streets.

The European Union may have decided that Catalans should forget all about independence for the sake of the peace of mind of everyone, but these people honestly don’t seem to give a damn. 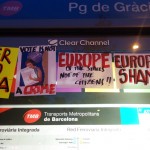 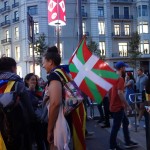 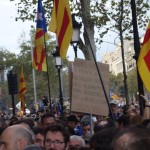 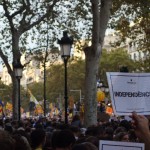 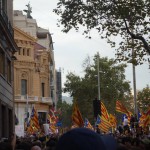 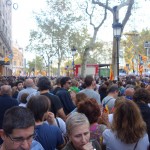 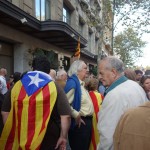 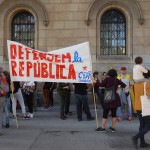 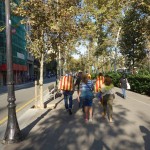