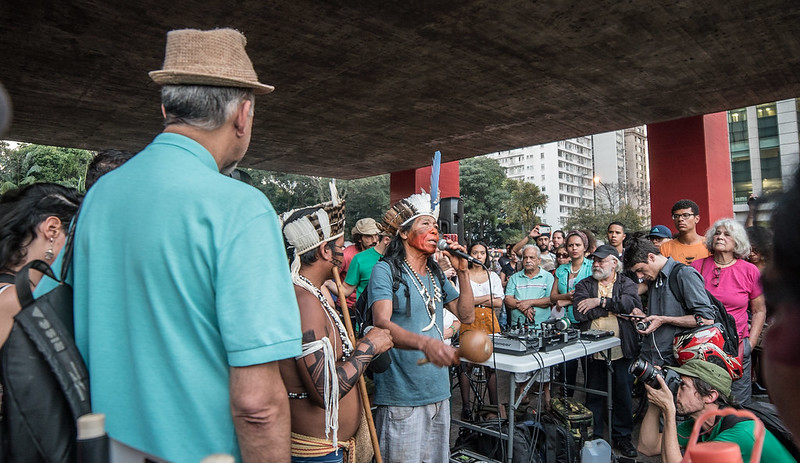 The photo displayed above is from a protest in São Paulo on August 30. The protest was because a federal court in São Paulo has decided to strip the area called Jaraguá of its status as indigenous land, effectively expulsing 700 men, women and children from the land they’re currently occupying, no doubt to satisfy hungry developers and real estate vendors in their dreams of seeing soy fields and shopping malls wherever clean forests and rivers can still be found.

The Guaraní will, as may be appreciated from these photos and from this video, not be taking this lying down, in fact the Jaraguá’s designation as indigenous land in 2015 was the result of decades of struggle on their part. With the current Brazilian government, however, and the possibility of the arrival of an even more right-wing one with the presidential elections next years, the prospects might be very bleak indeed.

The aspect of this case which I want to discuss stems from the fact that the photo above as well as the album it links to was taken by my friend Rafael Frazão, an active member of the technoshamanism network who has been instrumental in establishing a collaboration with the Guaraní in Mbya, Pico de Jaraguá (see here, in Portuguese, for an example of this collaboration). As many members of the network use Facebook to communicate, everyone posted the photos of the videos there – and something strange happens: The photos and videos from the protest got much less attention than everything else the same people were posting, as if Facebook was deciding that some things are best left unsaid and consequently declined to show this very protest to anyone.

I’m guessing that the reason is that Facebook’s algorithms figured out the pictures are about a protest and that protests are given low priority because they don’t sit well with ad buyers, e.g., they fall afoul of the algorithms that maximize ad revenue. All in all, a non-political consequence of some people’s reaction to this kind of material.

The effect, however, of this algorithmic decision is highly political. I apologize for speaking in all caps here, but effectively, and especially for those millions of people who use Facebook as their main communication channel, this means that Facebook SPECIFICALLY silenced news about a protest against more than 700 people having their land STOLEN beneath them as just one small step of an ONGOING GENOCIDE against the indigenous population in Brazil. Censorship hardly gets any more serious than that.

But what would the company’s general attitude to that kind of controversy be? Well, in his highly readable review of three books about Facebook, John Lanchester notes that

An early experiment came in the form of Free Basics, a program offering internet connectivity to remote villages in India, with the proviso that the range of sites on offer should be controlled by Facebook. ‘Who could possibly be against this?’ Zuckerberg wrote in the Times of India. The answer: lots and lots of angry Indians. The government ruled that Facebook shouldn’t be able to ‘shape users’ internet experience’ by restricting access to the broader internet. A Facebook board member tweeted that ‘anti-colonialism has been economically catastrophic for the Indian people for decades. Why stop now?’ As Taplin points out, that remark ‘unwittingly revealed a previously unspoken truth: Facebook and Google are the new colonial powers.’

This kind of censorship, and Google’s and Facebook’s arrogance and colonial attitudes, would not be a problem if these companies were just players among players, but they’re not. For a large majority of Internet users, Google and Facebook are the Internet. With the site itself, Messenger, Instagram and Whatsapp, Facebook is sitting on a near-monopoly on communication between human beings. It’s come to the point where the site is seriously difficult to abandon, with sports clubs, schools and religious organizations using it as their only communication infrastructure.

During the twelve years I’ve followed the free software movement, I’ve seen the movement go back and forth, sometimes winning, sometimes losing, never gaining much ground, but never losing in a big way either.

I suppose with the rise of Google and especially Facebook, this has changed: Free software has lost the battle for nothing less than electronic communication between human beings to a proprietary behemoth, and it is already – exemplified in a very minor and random way by the Guaraní – doing serious damage to democracy, to freedom of speech and to civil society in general.

So, dear lovers of free software, how do we turn this around? Ideally, we could solve the problem for ourselves by creating interoperable platforms built on free software and open standards and convince everybody we want to communicate with to follow us there. So easy, and yet so difficult. How do we do it?