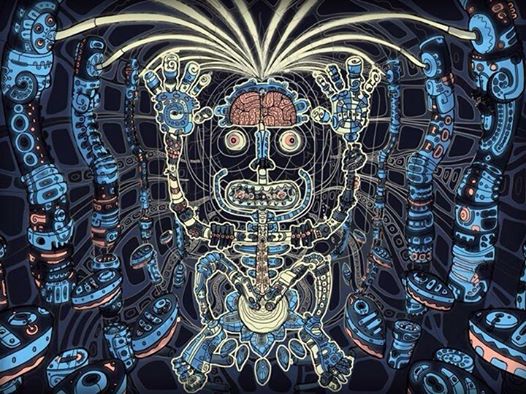 This Monday, I’ll be boarding a plane for Brazil in order to attend the First International Festival of Technoshamanism, which will take place from April 23 to April 30 in Arraial d’Ajuda, Bahia.

Which kind of raises the question: What is “technoshamanism”?

It can best be described as an attempt to unite science with religion, and to integrate the worldview of indigenous peoples like the South American Indians with modern technology. It is also about finding a new way for humanity in the era we could call the anthropocene, where not only indigenous people all over the world, but practically speaking all of us arfe threatened with impending destruction.

In that respect, and in integrating the indigenous worldview, technoshamanism is inspired by the perspecitvism introduced by the Brazilian anthropologist Eduardo Viveiros de Castro. This includes an epistemological inversion, where the split between living, conscious human beings and the “dead” Nature inherent in European thought is replaced with a more general view of the world, where animals and things can be considered “living” and “conscious” as well, albeit usually in another way. In that sense, Viveiros’ perspectivism could be considered a formalization and generalization of an Amerindian philosophy.

There’s a more comprehensive explanation available in an article by Brazilian writer and pshychologist Fabiane Borges, which was the basis of her presentation at Transmediale 2014 (in Berlin). I’ve translated this article to from Portuguese to English, and it’s now available as a PDF here.

The difference between the evolutionary and the Amerindian perspective is that the former believes that there is one nature and many cultures, while the latter thinks of it as many natures and one culture. For the Indian, the only culture that exists is human culture. Everything that exists is human. A stone, the moon, a river, a jaguar, the deceased – all of these are human, but they are dressed in different clothes, behave differently and have different views on reality. For the Indians, a meeting of shamans may mean the same thing as that of a congregation of tapirs in a mudhole – each group is performing its own rituals.

Of course, if we delve into the differences between groups, we will find different priorities for each species and a particular creation myth for each of them, but the important thing here is to understand that the human foundation shared by all beings also serves to connect them and keeps them in a state of constant communication. This understanding is very important: behind the nature of a stone lies a human culture which is also the basis for inter-species communication. (…)

The shaman is a kind of diplomat who has the ability to assume several of these points of view. He is able to contact all those different forms; he can change his clothes and visit the points of view of many different beings. There may be a pact between him and those beings, a mutual affinity but also a repulsion. He is able to leave his own point of view behind and see himself from the outside and see the Indians of his tribe from the point of view of the tree or of the birds, the moon, the stars, or any other object or material. This ability means that the shaman has a deeper insight into the nature of things than most Indians, because he has improved this technique by intense training. That is why his madness, his schizofrenia and his perceptual deviation is considered to be wisdom.

Such a worldview, however, doesn’t always match modern society very well. Borges discusses the French sociologist Bruno Latour and his distinction between “humans” and “earthbound”, where the “earthbound” are those who are more bound to our planet and its well-being, while the “humans” are more dedicated to human society, not least its financial aspects:

On one side we have the poor, dirty bums: lazy, retarded, subjectivist infantile hippies, losers, misfits, spiritualists, barbarians. On the other side the urban people, committed to modernity, growth, development, enrichment, security, productivity, objectivity, and expansionism. These opposed camps are, in spite of not being very clearly defined, disputing modes of existence and ways of relating to Earth and to Life itself.

The point here is, that in the overall economic management of our Western societies (or of all the world’s societies, if we want to tell the truth) the “earthbound” are losing or being neglected, while the “humans” are dominating; “financial responsibility” dictates constant “growth”, i.e., we must burn down the planet in order to preserve it. But if we want to survive in the long run, we might do worse than starting listening in earnest to the earthbound, or at least to the scientists from the IPCC.

Technoshamanism, by following this thread, becomes a kind of spiritual search for everything for which there is no room in the harsh realities of modern industrial societies. It thus becomes a philosophy of garbage – of all the things we routinely throw away: Madness, hallucinations, nonconformity, the compassion for the unemployed and the sick and the poor in general, if and when they are perceived as obstructive to the juggernaut of growth. This means that even though the refuses of society are not necessarily healthy, we are obliged to search for our lost humanity precisely on the garbage heap.

Borges summarizes this position as follows:

This is equivalent to saying that technoshamanism apart from arising directly from a transversal shamanism is also dirty and noiseocratic. It belongs in the garbage dump, is unclean. A significant part of what technoshamanism affirms originates in the leftovers of scientific thinking, from precarious laboratories, uncertain knowledge, hacking, electronic garbage, workarounds, cats, originates from the recycling of materials, from the duplication of already thoroughly tested scientific results.

To this we may add particular questions from social movements related to feminism, to the movements of queers, of blacks, for free software, of the landless, of indigenous people, of river communities, of homeless people and the unemployed among countless others who also perceive through their own noises, their own dissidency, their own garbage.

The last paragraph also tells us what this has to do with free software. In fact, the festival is arranged in close collaboration with the local hacklab Bailux, whose volunteers for several years now have been working with the Indians from the nearby Aldeia Velha to do things with free software; precisely, among other things, helping the Indians preserve their ancestral knowledge using free software. The Brazilian hacker bus, one of the “crown jewels” of a local hacker movement which is completely dedicated to political change through free software, will be driving down to the festival from São Paulo. So, while the overall political and philosophical ideas behind the festival are not related to free software as such, they have everything to do with a culture where free software is completely ingrained. And that, one might add, is not without its own significance.