Since posts like these often helped me setup some device, I thought I’d write one as well this time. Also it is advertising for a good free operating system. 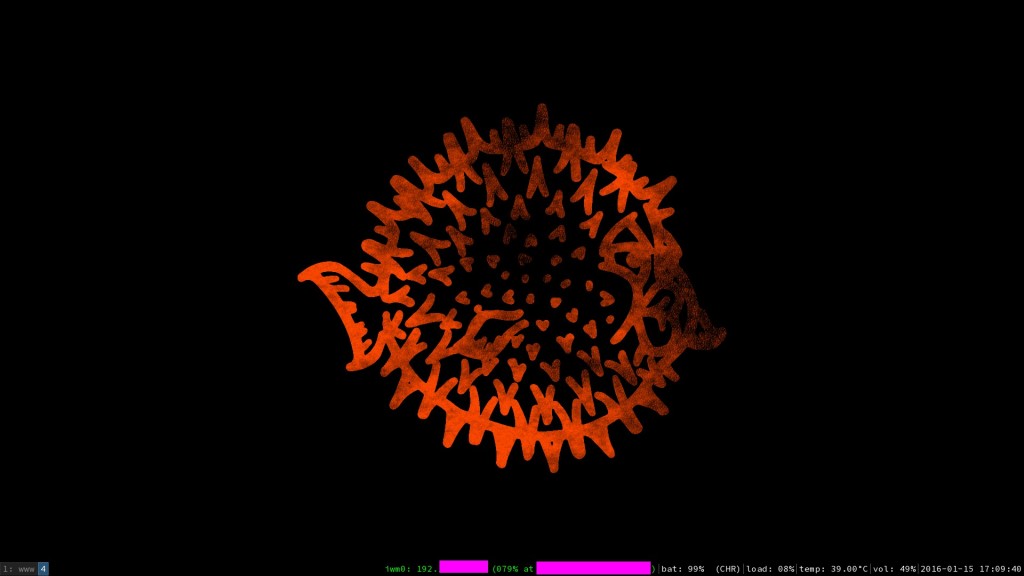 Everything works almost perfectly, good hardware, good software! You should give it a try 🙂

I have got a fairly high-end config:

You need a current OpenBSD snapshot (or 5.9 once it is released).

Et voila, you are on a current branch of OpenBSD. You should have seen the virtual console resize after the update to the new version.

The BIOS has some useful settings, you might want to make, e.g. switching
Fn and lCtrl buttons and switching the meaning of the F*-keys to be F*-keys by default and not “media keys”. Unfortunately deactivating the keypad from the BIOS does not work ( it can however be deactivated by software, see below).

No xorg.conf nor any configuration like that is needed to bring up X since the new Intel driver takes care of everything. 3D acceleration works, however the direct rendering devices come with write access only given to root. It’s probably a security “feature”, but it prevents 3D for regular users so I created
/etc/rc.local (this is run on startup) with:

You should have setup the keyboard to your local layout during install, but if
you haven’t done so or want to deactivate dead keys you can edit /etc/kbdtype, e.g. to de.nodead. This affects both the console and Xorg. Inside Xorg the “media buttons” for display brightness and sound work automatically.

To deactivate the mouse touchpad and make scrolling working with the pointer in combination with the middle mouse button, I have added the following to my .xinitrc/.xsession:

I have to note though that the Pointer Wheel Emulation does not work satisfactory, there is often some jitter and then scrolling stops working. Also the increased sensitivity produces very slight ghost movements of the mouse (very small, but noticable movements of the mouse in the bottom left direction). I still need to debug this, maybe its also a hardware issue.

UPDATE: I was experiencing more problems with the keyboard, including the space bar not working reliably, so I had the hardware checked resulting in a replacement for the keyboard. After this, all problems related to the mouse disappeared, as well, so I am pretty sure it was actually a hardware issue.
But I also updated to a more recent snapshot so maybe the mouse problems were software related. In any case they are gone now.

The dock seems to work (charging and on/off), although I have not yet tested hooking up external input devices or screens.

Both lan and wlan devices come with working drivers and the firmware for the wifi card is automatically downloaded upon install. It should be noted that OpenBSD does not have a service for managing networks and that it implements WPA[2] PSK inside its regular networking infrastructure (it doesn’t need wpa_supplicant). For enterprise WPA (like eduroam) however, wpa_supplicant is needed.

I have fiddled around with some solutions and ended up adapting a script. The original is wifinwid, but I changed it so that it restarts wpa_supplicant before trying every network and also only starts dhclient after it has attached to a network. This solution requires a file at /usr/local/etc/nwids.iwm0 with your saved networks in preferred order (every line is the arguments line for the ifconfig call), e.g.:

Ultimately you have make the script be started on boottime and also initially make it not connect to some random unencrypted network via /etc/hostname.iwm0:

Now you have the behaviour that it only ever connects to known networks and that you can roam between different known networks, encrypted or unencrypted, PSK or with personal authentication.

This enables speed-stepping and also suspend and resume. I have tested the zzz command (suspend to RAM), but not yet ZZZ (suspend to disk). There seem to be no problems at all with X and the wifi also automatically reconnects if setup like above.

Brightness control works through keyboard shortcuts and the battery time seems to be good, although I haven’t done long-term tests, yet. With the large battery official number is “up to 20 hours”, if I get 12 hours that would be enough for me. A nice thing is that the notebook has an internal battery so you can change the external one without rebooting. The estimation of the remaining time via apm or sysctl seems to be accurate and my windows manager i3’s infobar supports these sensors automatically.

Altogether I am very happy about the hardware support, with the only annoyance being the mouse (which is not crucial, because I work more via keyboard anyway). Thanks to all the involved developers! I will probably update this post in the near future, once I have more things tested!