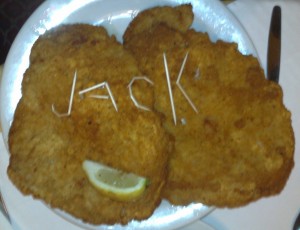 It’s over! After working four days in a row at the FSFE booths at Linuxwochen (“linux week”) events in Krems and Vienna, Austria, I finally have time to post my first blog, which is about these events (or did you expect anything else?).

The Austrian FSFE coordinaters Georg Kienesberger and Peter Bubestinger took me to Krems on Wednesday, where the local Linuxwochen event took place. We had a booth there and Peter even gave a lecture on how free software enhances the freedom of education. It was quite fun there although we didn’t sell too many shirts or pins. Between the different talks that were held there, it was fun to talk to different teachers who where the target group of this event.

The Linuxwochen event in Vienna started on Thursday and since I was part of the organisation team of this event, it was the first time I came to an event before all of the other FSFE guys :-) Georg came next and we started to arrange the booth, which was a bit difficult since there wasn’t too much space in the room we were in. Nevertheless it was a nice location, because the old rooms in Vienna’s city hall are really nice.

The first day of the event was really funny and quite a few fellows from Vienna showed up. The most important thing for the Vienna Fellowship group was that Reinhard Müller, FSFE’s financial officer, paid us a three day visit, whom we always love to meet. In the evening, we had small party at Vienna’s famous Hackerspace, the Metalab. When Reinhard gave a live performance of his famous “Schnitzelmonster” song and told us the story of it, we couldn’t stop laughing. We continued to sing different (more or less famous) songs since Reinhard showed us his outstanding guitar playing skills. The Metalab guys didn’t like all of the songs we sang, but the didn’t kick us out either, so we contiued our funny little party until we realized that this was very much like different youth camps some of us had attended when they were young. This was the point when a new idea arose: Fellowship camps! I guess most hackers have been confronted with the stereotype of the guy without a girlfriend who hasn’t seen the sun for years or thinks that reality is where the pizza guy comes from. We have to destroy that. So why not make FSFE fellows meet somewhere out in nature, let them hack in the morning and have parties at night (which is a very simplified way of explaining the idea we discussed)? Most of us liked the idea and I hope that some of the few readers of this blog will like it too, so maybe this dream will come true someday. Feel free post comments about how you like this idea!

I had to leave to leave early on Friday, so I can’t tell too much about what happened that day, but from what I heard, there were not as many visitors as expected.

Saturday was the last day of this event, but the day with most Fellows helping us at the booth. Peter and David Ayers gave a lecture on going to the future safely with free software. We also had interesting visitors and a very good time in general. We also fixed differnt computer problems and helped people with their Free Software utilities. I didn’t join the Linuxwochen After Hour that took place at Metalab, since I had to get up early today, but if this event is similar to those of the last years, it must have been really nice. Reinhard left at Saturday night and I’m still unhappy that I didn’t have the time to say good bye. I’m now waving to him across Austria and I hope he had nice journey.

Now I’m looking forward at the Linuxwochen events in Linz and Graz next week, which I will also attend (and maybe even blog about them :-)