In the last months of my internship at FSFE, I started following debates around TTIP (the Transatlantic Trade and Investment Partnership). TTIP is a huge “deep and comprehensive” free trade agreement between the US and the European Union, which started to be negotiated in July 2013. Well prepared by the great ACTA scandal of 2012 and by the November 2013 leak of the Trans Pacific Partnership (TPP)’s Intellectual Property chapter (thanks Wikileaks), we immediately looked for the impact of TTIP on software patents, copyright enforcement and DRM (digital rights management) circumvention. After a few months working full time on the topic, I now believe that the problem is much deeper that any of these specific issues.

This week Tyler Snell wrote an outstanding article about the “deep and comprehensive” trade agreements. He develops the useful concept of policy laundering. Here is what he says:

A growing pernicious trend that is greatly affecting digital policy around the world is called “policy laundering” – the use of secretive international trade agreements to pressure countries to commit to restrictive or overly broad laws that would not ordinarily pass a transparent, democratic process.

Not only is the behind-closed-doors procedure questionable, many of the representatives negotiating such agreements are not elected representatives but rather trade appointees and powerful multinational corporate lobbyists. Policy laundering deprives each jurisdiction, and most important their citizens, the chance to engage in a legitimate legislative debate.

Provisions which failed to pass democratic elected parliaments, brought back to life through international treaties, it sounds much too familiar. A few reasons why the trick does work:

1) Access to a limited number of negotiating documents is only granted to the few MPs member of trade committees (INTA in the case of the European Parliament). This access is made via “secure reading rooms”. They can take no notes, bring no devices. They cannot come with staff members specialized in Trade Policy.  Seeing the complexity of trade deals’ texts (often over 1000 pages of legalese) and the fact that the devil is always in the details, they are highlight unlikely to manage anything useful with this kind of “access”.

3) Secrecy around the negotiations make campaigns very difficult. Activists are often forced to fight without knowing what they fight, until it is too late (building a campaign takes time). They are either restraining themselves in order to not say anything untrue, or basing their work on guesses. It is then easy for the deal’s promoters to dismiss the critics as “lies” or “misleading“. Reversing the burden of the proof this way is highly undemocratic in itself.

Fortunately, there are still great people working in the institutions. Documents are leaked surprisingly often, enabling us to criticize secrecy AND to know what we are talking about when discussing the content. Thank you sources.

After years of negotiation, the deals finally arrive in front of parliaments for ratification. MPs are then supposed to say a simple “yes” or “no” to a thousand pages of text, likely to include good and terrible things. In case of bad wording, loopholes, blurry definitions, harmful provisions, MPs cannot amend but have to reject the whole agreement. The pressure to ratify, after “so much effort put into the negotiating process”, is enormous and trade deals are therefore usually overwhelmingly ratified.

Fortunately, sometimes things do not go as planned, like in the ACTA case.

In Europe, trade and investment are EU competences. However, “deep and comprehensive agreements” deal with more, including sectors that are still competences of the Member States. After ratification by the European Parliament, such deals must therefore also be ratified by national parliaments. Because democratic processes take too long, they can enter into force provisionally, which means before ratification – the vote of elected representatives. The provisional entry into force exerts pressure on national parliaments to vote in favor of the agreement. When ratification might be difficult, or event rejected in a country or region (for federal states), the ratification is not put on the Parliaments agenda and the provisional implementation stays in force.

Worst, states who did not ratified a trade or investment agreement, but have it in force because of the provisional application can be attacked via dispute settlement mechanisms included in the deals.

Another great article recently analyzed the $50.02 billion (yes, yes) Yukos ISDS case (Investor-State Dispute Settlement) under the Energy Charter Treaty. Independently from the rest of the story, the author notes that:

[it] needs to be emphasized here that Russia only accepted the provisional application of the Energy Charter Treaty (pending ratification) in 1994 meaning that the country will only apply the Treaty “to the extent that such provisional application is not inconsistent with its constitution, law or regulations.” Same was the approach adopted by Belarus, Iceland, Norway and Australia.

Russia never ratified the ECT and announced its decision to not become a Contracting Party to it on August 20, 2009. As per the procedures laid down in the Treaty, Russia officially withdrew from the ECT with effect from October 19, 2009.

Nevertheless, Russia is bound by its commitments under the ECT till October 19, 2029 because of Article 45 (3) (b) which states that “In the event that a signatory terminates provisional application…any Investments made in its Area during such provisional application by Investors of other signatories shall nevertheless remain in effect with respect to those Investments for twenty years following the effective date of termination.”

I strongly encourage you to read the whole analysis. What it means is that a government can sign any treaty, with far reaching consequences for its population, economy, environment and ability to legislate, and the state can face the all the consequences of the agreement without ever having asked the parliaments’ approval.

Why does it all mean for free software

Free software is important, but it is only one of many crucial policy issues. Trade deals like TTIP or CETA can have an impact on free software – and I will describe concretely how in a next post -,  like on everything else you care about, be it pesticides control, financial regulation or animal welfare.

More importantly, they modify policy making as a whole, making it less transparent, less democratic and harder to reform for the best.

However, ff enough pressure is put on members of the European Parliament, 2014 might see the second strong rejection of a dangerous secret deal, after ACTA. CETA ( Comprehensive Economic and Trade Agreement), the EU-Canada deep and comprehensive free trade agreement, was concluded last week. It will be initiated in September and its ratification process in the European Parliament will start this Autumn. A good moment to send a strong message to the European Commission and to our governments: policy laundering is not a legitimate way to legislate, and should never be.

Tonight at 7, we will meet again at the office to work on the EC Copyright Consultation. The last meeting was very good. There was five of us, 40% female participation \o/

As expected, we spend half the time struggling to answer questions, and half the time debating and putting the world to rights. We all also realised how little we knew about the topic. A imaginary conversation:

Consultation: “Are you sometimes blocked when trying to do this or that online?”

Us: “Well…we somehow remember that we are supposed to be, but you know, as soon we are blocked we circumvent the blocking measure… like everyone else does.”

(Resemblance to existing persons and situations is purely coincidental..)

A recurring remark (when not using copywrongs.eu) was : “They [the European Commission] REALLY don’t want us to answer this consultation… .” …but we will.

After a week reading, tonight’s session should be even more productive.

This morning I went to RT’s Berlin studio to talk about EU Data Protection Day. A journalist contacted the cryptoparty Berlin team, and I volunteered to answer her questions.

I was barely in the studio when they made me sit, straight up and look at the camera. No one really explained anything. The journalist had given me half a dozen very interesting questions about privacy and data protection, I was ready to talk for 2 hours. The actual interviewer (a strange woman in Moscow with an outstanding purple dress and heavy make-up) asked two very basic questions and let it go: it lasted something like a minute and half. I didn’t even say the word Free Software.

It’s the third time in a month that I have frustrating interviews during which I can’t say anything interesting. I need to get used to it and/or to write a good talk and start submitting it to conferences to get control over my own speech back 😀

For a week I have been trying to find motivation to reply to the European Commission consultation on copyright, without much success. After two years (loosely) following the issue, I’m still unable to understand what most questions imply. An example among many:

Each act of transmission in digital networks entails (in the current state of technology and law) several reproductions. This means that there are two rights that apply to digital transmissions: the reproduction right and the making available right. This may complicate the licensing of works for online use notably when the two rights are held by different persons/entities.

10. [In particular if you a service provider or a right holder:] Does the application of two rights to a single act of economic exploitation in the online environment (e.g. a download) create problems for you?

Since I can’t get through 36 pages of legalese alone, we are organising a little “education by the people for the people” session this Friday, with friends and fellow Free Software activists.

The idea is to go through the consultation, understand as many issues as possible, discuss them and use various online material to answer our questions, broaden our understanding and get more reasoned opinions on copyright law. Right now I usually just say “La Quadrature is right”, it’s not a very subtle argument..

I’ll report on how it went.

A week after it, I finally found time to write about our international Document Freedom Day meeting. Last week the DFD core team met in Berlin to discuss next year’s campaign. We have a bit less than four months left, and it’s not much. 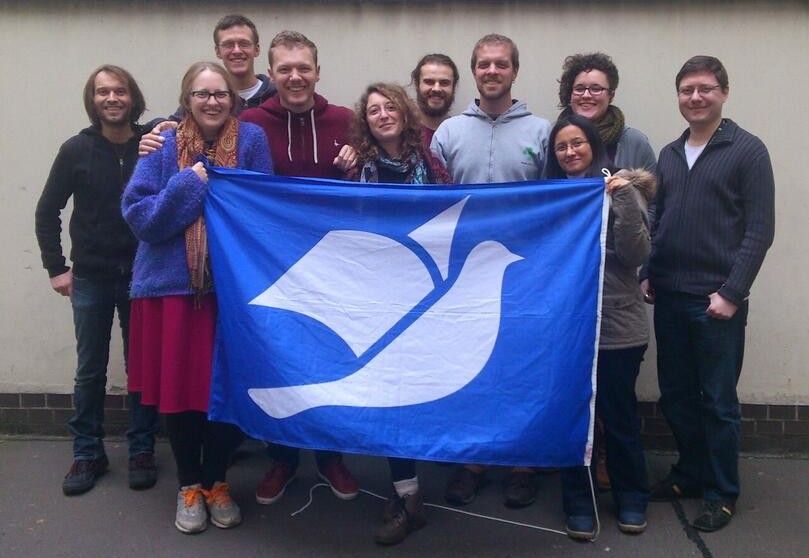 We discussed the new aspects of this year’s campaign, the new subcampaign about Open Standards in education, merchandising, advocacy material, new content on the new website (!), our strategy to grow DFD outside of Europe and so on..