As mentioned in my previous blog post(post is in German), the Fellowship group of Linz has celebrated Document Freedom Day(DFD) in Linz by hosting a booth with informational materials.

It was a clear (and windy) day over Linz as we set out to celebrate DFD. Shortly before 9am, our team of three volunteers met at the DevLoL Maker/Hackerspace.

The people of DevLoL had kindly allowed us to borrow a table, which we then carried to the location of our booth. After this invigorating little walk and after setting up the table decorations, we were aptly warmed up for booth duty. 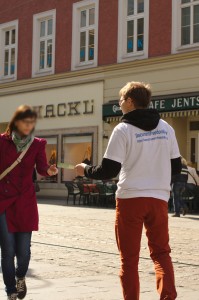 Given the decidedly non-techy crowd that predominates the city centre, a surprisingly high number of people was willing to listen to our explanation of Document Freedom Day.

A number of people (both young and old) actively engaged us at the booth, listening eagerly and asking questions about document freedom and free software in general.

Of those people, about half were already familiar with free software. For the others, open standards and open file formats were new concepts and some were even surprised to learn how they were already benefiting from these concepts. 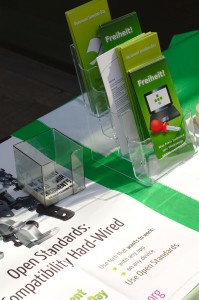 The only nuisance that kept bothering us was the stiff breeze, almost blowing away the booth decorations at times. In the end, we were forced to move the table a few metres into a more sheltered location. The new location had the additional benefit of us not freezing as before, so we were not unhappy about the result *g*

Another thing that could have went better was the absence of German language leaflets. Unfortunately, the parcel containing them had not arrived in time and we had to make due with English version.
Fortunately though, most of the attendees expressed that this was not a problem for them.

All in all, many leaflets were handed out to interested people, awareness was certainly raised, and a fun time was had by all. 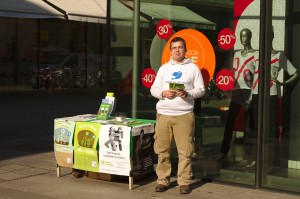