During these past months I have not meet so many female fellows, so I was really happy to have the chance to interview Anna Morris, a fellow from UK. Do not misunderstand me: I do not catalogue fellows according to their gender (as I think the gender gap is merely a genetic issue that has nothing to do with our daily performance and that it is a product of our society) but  yet, it is nice to know that women are also having presence in the software community. 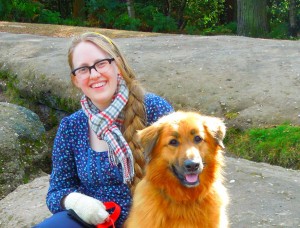 Anna Morris is one of the coordinators of the Manchester Fellowship Group, she is an online EFL (English as Foreign Language) teacher  and since last year, she runs an Ethical pet online shop.  She  helped to found FLOSSIES,”a women only Free Software organisation/conference”, using her words.

Due to the later, she was interviewed by the BBC. ” I was nervous to accept as I hadn’t been doing very much work on the flossie.org project and did not want to seem pushy or steal attention from those doing the hard work. However, I was the only person free to do this interview, so I agree”, explains Anna, who adds that “” the interview was conducted over Skype, which was a little frustrating”.

The podcast of the interview is available on the BBCwebsite or can be downloaded in the Free Software Ogg Vorbis audio format here.  It starts 17 minutes into the podcast version of the show “outriders”. Though Anna complains that she sounds “like a public school girl from the south of England (which I ain’t) but otherwise, it was… okay.” ,  I totally recommend to listen to it. And despite the interview was about FLOSSIES she, citing her, “actively made sure the part about FSFE could not be easily eddied out as I feel that FSFE is an exceptionally fine communicator of Free Software”.

– Your interview by the BBC could be a way to rise people’s awareness and to help to spread the labour of FSFE. Do you think media are informing and giving the right coverage to Free Software?

I think the media are actively avoiding the issue of Free Software. The media is very powerful in shaping how we think, however, this is a cyclical relationship: they also grovel for our approval and attention (usually by resorting to using pictures of naked boobies or scenes of devastation).

One problem is that Free Software, while a sensible and obvious path to take, can be an uncomfortable and intimidating topic to read about. This is partly because aggressive software companies like to keep us afraid of technology, which in turn neuters our ability to cope with change. Our Free Software revolution will require change.

Also Free Software, while causing discomfort for the many who fear change, simultaneously lacks both the appeal of naked boobies and the voyeuristic enchantment of car-crash or war-zone photos. Free Software is also sensible and obvious (ie: lacking in melodrama). Which journalist would want to subject their reader to all that?

This said, it’s not as if Free Software can’t be sexy or interesting in a way that a journalist might appreciate: it’s just choosing the right issue to push at the right time. For example, how hot is raspberry pi right now? And android? Come to mamma! The social and political issues surrounding these devices should be easy fodder for the media just now.

I think FSFE is brilliant at issue based campaigning: this because the Fellows, who have joined an EU wide organisation because they are forward thinking, well rounded and generally hip, are integral to the running of the organisation. Thus campaigns such as “free your android” and “theydontwantyou.to” (so in tune with the public mood) grow organically and with passion.

– Since when are you using and advocating for Free Software?

I have been using for longer than I initially realised, as Free Software is all over the place and in many forms. I have been consciously using Free Software for about 3 years and advocating it for about the same amount of time. I found out about Free Software when my iMac blew up because it was full of cat hair, and my dad gave me a laptop with Ubuntu on it. In actuality, my Dad gave me the laptop several months before – but I saw no reason to use it, as I had an iMac… once I had been given the push to use it, I absolutely loved Ubuntu, and while a lot of this love was for the philosophy of Free Software, it was the usability and attractiveness of Ubuntu that inspired me to take my first steps.

This all seems like a long time ago now, but it was certainly a magical time. The answers to so many questions were fulfilled – and a world of choice soon opened up to me. Three years on my rudimentary computer skills have blossomed into a skill set which liberates me, and I see no boundaries when it comes to technology. If I want to do something, I simply learn how to do it. This way of life would not be possible if I was still using proprietary software.

– It seems Free Software and the FSFE labour is a “man” thing. Women usually are not so good with computers so they are not so involved in these topics / issues. Do you think this trend is changing? Have you find any challenge for being a woman?

I think women are generally more computer literate than men (think of all those ladies working in admin!!) and that the factors which cause gender imbalance in the more “involved” areas of IT such as programming and Free Software campaigning are social and social only. Perhaps the fear of looking “clever” is an obvious factor, especially as the computer programmer seems to have been allocated the pedestal just below rocket scientist and brain surgeon… that’s a long way down to fall when people figure out that hacking is a multi-purpose tool used by creative people in general…

– So, is the Free Software community, and above it FSFE, “women- friendly”?

Free Software, like many areas of work and play, is not always welcoming to women. This said, it is no less welcoming than a boozy local pub on a Friday, or even the top jobs in fashion, hairdressing or even primary school teaching (the lower ranks of which are swollen with women, the upper-ranks filled mostly by men). The problems affecting women in Free Software are not to  do with Free Software per se, but to do with society in general. This don’t mean we don’t have to try to make Free Software work more open to women of course, in fact, as people working for social change – it’s vital that we make extensive effort.

I feel FSFE is an organisation very open to women – there are a ton of female “Fellows” (haha) and the positive campaigning, polite language and attractive website design  create an atmosphere in which I (as a female person) feel comfortable and relaxed. It seems to me to be a very gender-neutral organisation, which is a relief. That said…..

– Do you think our society is well informed about the different software possibilities?

I believe the majority of people in the UK have no idea that they have a choice when it comes to their computer software. The simply use what comes on the machine – if you buy a Mac, you use Mac OS. If you buy a “PC” you use Windows. Many people don’t even understand the idea of “not Windows” – one example, in a BBC TV crime drama recently, a “computer hacker” had been murdered; they gave his laptop to the techie member of the detective team, and when he switched it on he said “Oh no, its a Unix based operating system” (I assume they meant Linux) – as if he just wouldn’t know what to do at all, as if it would be 100% alien. They had to get a man in from another department.

A second example – A collage teacher said to me recently “so when you switch on your computer… if its not Windows… what’s there?” I think she just envisaged a blank screen, or perhaps some cogs churning… she just couldn’t imagine what a different operating system could be like.

I remember feeling like that: it makes my skin crawl to think how much control Windows and Apple had over my understanding of computers. Once you figure out that an OS usually still had menus and icons and a task-bar, life becomes much more colourful! Once you lean the concept of the general purpose computer, the world is your oyster really!

– Do you think people are aware about the problems of non Free Software? Or quite the opposite, do you think most of the people do not use Free Software because they think it is really difficult?

I think people often experience problems with proprietary software and closed formats, but assume that any problem is down to complex technical issues. It doesn’t cross their mind that anyone would actively try and prohibit them from using their computer freely.

Also, I said before, I think people deeply fear change – a factor not helped by how busy and stressed out people are, how little time most get to spend with their family and friends, and how little meaning people have left in their lives. Fitting Free Software into their lives is a big ask actually.

When the wonder of Free Software is revealed to someone, they often have a spark of excitement, and then return to the glum look of the downtrodden. In suppose some ways, it all sounds too good to be true: how could they be liberated? How could their PC possibly be Free?

Peoples experiences with computing are often so negative, anyway – expense, false advertising, shoddy software, DRM and closed formats – I honestly think its hard for many to envisage software that is good and also free. Again, if people assume all of the above issues are technical and not “legal” or “monetary” issues – why would they trust Free Software?

This is why words are not enough: presentations must be practical, hands on, interactive. People need to feel Free Software. I am beginning to think that every Free Software group and fellowship should have a cupboard of spare pc’s, all running a different OS, that they can cart about and show people. In the North of England we say “the proof is in the pudding.”

–  There is a long way towards a “Free Software society”. What do you think each of us should do to achieve that objective?

I think we need to understand that we represent something much larger than our individual- selves. As t-shirt wearing, sticker flashing, leaflet distributing representatives, we need to be clean, polite and respectful to others. Our target market is everybody and so I don’t mean that we all need to be the same – that would be self-defeating. I guess I think that we all just need to be the best of ourselves, and understand that there is plenty of room in this community for all of us and many many more. Passion can breed arguments, but we have to do everything in our power to make our free-software relationships productive and positive. It’s not always easy, sometimes people are very difficult to get along with – but we must try, because there is no time or room for negativity. Well that’s what I think anyway.

P.S. Unfortunately, I could not meet her personally, so the interview was done per email so I hope I can meet her in the future to discuss these, and other topics.