Yet another friend of mine came to me with the problem that they were stuck with the music collection they currently had on their iPod, because they’ve had to re-install the OS on their computer, and were now afraid to connect it with iTunes, since it might “synchronize” their not-on-the-harddrive-anymore collection and thereby wiping all the music from the iPod.

Since that wasn’t the first time I’ve heard this, I offered that I “might take a look at it” – and try to hook it up with my all-time-favorite music player and operating system: Clementine on GNU/Linux (Xubuntu 12.04 LTS).

I was expecting the iPod to be accessible somehow on GNU/Linux, and expected to have to read some HowTos, etc – but I was amazed: It just worked! ™
I connected the iPod over USB, and it immediately showed up as mass-storage device (it’s labeled “PAN”): 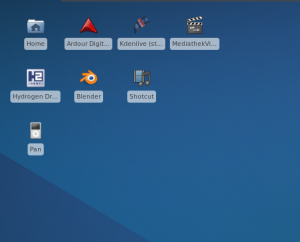 I double-clicked it, and was served with the files on the device. The music collection is stored in a non-human readable way: The folders are labeled “FXX” (XX being a zero-padded number), and the music files had 4-letter names with some hex-IDs. 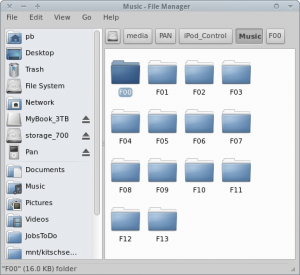 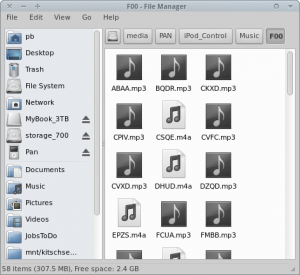 Hm… Let’s hope the files are tagged properly, and that Clementine can handle them.
So, I started Clementine and selected the option “Devices”. There it was! 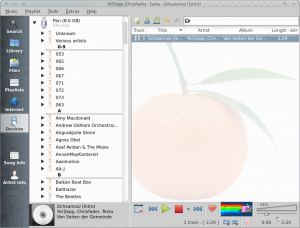 Not only could I access (and therefore backup) all files on the iPod, but Clementine can read and even upload songs to it without problems – or any configuration necessary. Just select the tracks you want to upload to the iPod, right-click and select “Copy to device…”.
That actually makes way more sense for handling your music collection on your portable music player.

Summary:
So not only was I able to easily make a full backup of the data on the iPod, but I could easily manage handling the music collection, with the full convenience of Clementine for browsing, tagging and uploading the files.

That’s yet another situation where Free Software enables users to avoid the unnecessary lock-in by the original vendor.
I’m not suggesting anyone to get an iPod, but some people already have one – and it’s better to enable them to use it with Free Software, than have them throw it away.

It might be one of the few MP3 players that survive more than a few months, but it’s just too “restrictive/defective-by-design” for my taste. My all time favorite portable audio player is the “Sansa Clip+” on Rockbox 🙂
Once you’ve gone Rockbox, you just don’t want back (Especially as an audio engineer)!

The video-domain is a tricky thing, but I’ll do my best 🙂

Before we proceed, let’s make sure we’re talking about the same things here:
AVI, MOV, MKV and OGG are merely audio/video containers. Not codecs.

When talking about digital videos, people often just refer to the container format, as this is what they “see” when they see the file. But digital video consists of 3 parts:

There are hardly any patents or licensing issues regarding containers. AVI for example is, according to my knowledge free and open – even though it’s been specified by Microsoft ages ago, and MOV (=Quicktime container) licensing appears to be limited to their software, but not the container.

Ogg as container has gained popularity within the audio domain, but is hardly being used for video. I guess, because MKV (=Matroska) seems to be the best solution for the job at the moment. For web-applications, Google’s “WebM” might be a good thing in the (near) future.

As Matroska also supports to be used as audio-only container, I’d personally find it not unlikely, that the current popularity of MKV among consumers might lead to a broader adoption of that format for audio as well – but that’s difficult to say…

For video hardware it’s currently definitely the case that many of them support MKV out-of-the-box, but will very likely never see any reason to support OGV.

So, when talking about patents and licensing issues in the audio/video domain, it’s about the codecs – or algorithms used by them.

Popular non-free lossy (consumer) video codecs at the moment are:

Free ones comparable to MPEG-4 at the moment are:

In the audio domain, the popular non-free ones are:

And the free ones:

NOTE: I’ll leave lossless codecs out of the game for the moment, as they are not as widely used/seen by regular consumers.

What is being compared?

Sorry for the detailed introduction, but I think it’s a good thing to make clear that for digital video you need to consider all 3 things:
video-codec, audio-codec and the container.

Usually, most people are actually comparing the most common/popular codecs used within the containers to each other, probably being:

All currently widely used non-free A/V codecs mentioned above cannot easily be implemented and shared as Free Software, because it might infringe licensing or patents of these codecs.
This means, that depending on the legislation of the countries where the software is downloaded from – and the country the software user is living in.

Nice example: VLC has a note on its website explaining why they are allowed to distribute their application freely:

Their servers are located in France. If they’d be located in the U.S. things would be very different.

As Free Software developers could get sued for distributing patented software, most distributions and applications must be shipped without support for these formats. This is the reason why MP3, DVD-Playback, etc. doesn’t work out-of-the-box on Free Software OS (e.g. Ubuntu, Debian, …)

Even worse: Some licensing forbids implement things as Free Software, because then the inner-workings would be visible (although this applies mostly to media-related DRM issues)

With proprietary software, the users are already paying for the (partial!) use of these formats: The royalty fees are included in the price. Funny though, that noone really ever reads the licensing texts, as Apple’s Quicktime license for example, states that additional fees are are required for using MPEG-2/4 for other than personal- or non-commercial use:

“ANY USE OF THIS PRODUCT OTHER THAN CONSUMER PERSONAL USE IN ANY MANNER
THAT COMPLIES WITH THE MPEG-2 STANDARD FOR ENCODING VIDEO INFORMATION
FOR PACKAGED MEDIA IS EXPRESSLY PROHIBITED WITHOUT A LICENSE UNDER
APPLICABLE PATENTS IN THE MPEG-2 PATENT PORTFOLIO, WHICH LICENSE IS
AVAILABLE FROM MPEG LA, L.L.C, 250 STEELE STREET, SUITE 300, DENVER,
COLORADO 80206.”

So if you use your iStuff to make a video and then go-pro and make money with it: You could get sued… (But I’m not a lawyer)

As you can see, licensing and patent issues with A/V codecs mean that a developer can only join the game if they play by proprietary rules – and have (enough) money to do so. So, even if it’s technically possible to implement these formats as Free Software (e.g. LAME, x264, …), these legal barriers make it difficult (or impossible) to grant access to content encoded in these formats.

When talking about money, you might want to take a look at the MP3 licensing costs for starters (…and that’s an ancient format already!) – or the pricelist for Microsoft codecs.

I hope this cleared things up a bit? 😉

This year’s focus on the document freedom day wasn’t on printable document formats as the years before, but rather on multimedia formats. Why? Because those formats are “documents” as well, and are used daily for storing and exchanging information.

That’s why the FSFE has decided to award some radio stations that provide their program-stream in an open standard format. For audio, that’s “ogg/vorbis”.

So, we (a small group of fellows) put on our newly made “rOGG on!” shirts, grabbed our perfectly designed DFD-cake and went over to the radio station of ORANGE 94.0 to congratulate them for their good work, and celebrate the DFD together.

We were received with a very warm welcome by the nice people at ORANGE 94.0 – including the news that they’ve taken the DFD-award as a reason to upgrade the bandwidth of their ogg/vorbis live stream. Wow! That’s great!

Surprisingly Manfred from Radio Netwatcher was waiting there with audio/video recording equipment in order to record and report about that event in one of the upcoming episodes of Radio Netwatcher.

Since, we assumed that the nice staff at ORANGE 94.0 knows what they’re doing – and why, we didn’t prepare a long speech, so Georg got caught a bit surprised, when Manfred asked him for a few words about “why we are here today”. 🙂 Nevertheless, he did a good job at providing that information instantly.

After we’ve finished the professional foto-shooting session, including highlights like:

…we’ve provided everyone with enough to eat and drink, and stayed for quite a while, having interesting conversations with ORANGE 94.0 staff members.

Images from the event can be found on the DFD-2010 page in our fellowship wiki:
http://wiki.fsfe.org/DFD-2010-BCV