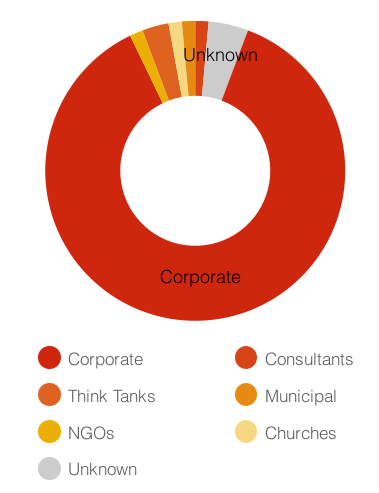 It seems I’m not the only one interested in who the European Commissioner for Digital Economy and Society, Guenther H. Oettinger, is meeting with.

This morning, Spiegel Online is running a thorough piece (in German, natch). Politico Europe has the story, too. And Transparency International is launching EU Integrity Watch, making it easy to see who in the Commission’s upper echelons has been seeing which interest representatives.

The upshot of all this? Oettinger is meeting almost exclusively with corporate lobbyists, or with people acting on behalf of corporates. According to Spiegel Online’s figures, 90% of the Commissioner’s meetings were with corporate representatives, business organisations, consultancies and law firms. Only 3% of his meetings were with NGOs. Of the top ten organisations he’s meeting with, seven are telecoms companies, most of whom are staunchly opposed to net neutrality.

Oettinger and Commission Vice President Ansip launched the Digital Single Market (DSM) package on May 6, including some last-minute tweaks that pleased broadcasters. During the weeks before the publication of the DSM package, Oettinger met with lots of broadcasters. His office also neglected to publish those meetings until we started pushing for the data to be released. Even in a Commission where three quarters of the meetings involve corporate lobbyists, Oettinger’s one-sidedness sticks out like a sore thumb.

With its decision to publish at least high-level meetings, the Commission has taken a commendable step to shed some light on the flows of influence in Brussels. In this regard, it is far ahead of most national governments other than those of the Scandinavian countries. Now that at least a bit of sunlight is flowing in, it’s easier to see the ugly spots. Oettinger clearly needs to be much more balanced in selecting his meeting partners. His superiors in the Commission need to make sure that he improves.