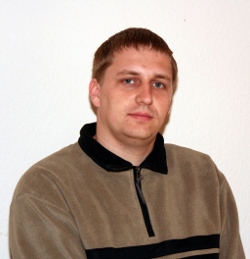 This month I chatted with Bernd Wurst, who operates Free Software based servers and workstations for the customers of his pro-privacy web-hosting and IT service company, schokokeks.org. He grew up on a farm in a rural district of southern Germany and got in
touch with computers in the early nineties. He has been using and advocating Free Software since 2001, and volunteers for the Freedroidz project.

Chris Woolfrey: What first got you involved in Free Software?

Bernd Wurst: I switched to Free Software at about 2001, after discovering it at university where I studied computer science. After switching over my desktop, I learned a lot about the philosophy of Free Software. Since then all computers I’ve operated – my family’s, too and some friends – have been switched to Free Software. I used Gentoo GNU/Linux to really learn the internals – I think Gentoo GNU/Linux had only just been founded when I started using it.

Those experiences were very valuable to me. As a Gentoo GNU/Linux user, you can’t avoid being a bug reporter for a great number of Free Software projects – as packages are build on thousands of computers many errors occur – so I think I’ve supported a lot of projects. But I’ve never been an official team member of any project, or anything like that.

I don’t see myself as a coder. My web hosting company schokokeks.org – founded together with Hanno Boeck – relies on Free Software, so we certainly do bug reporting and stuff. Really I’m an administrator, so in terms of Free Software, I’m only a user. But I am a proud member of OpenStreetMap, having mapped my hometown. I am a member of the FSFE Education Team, and I’m involved in the freedroidz project.

The Freedroidz project is a really cool idea: pupils should have fun while they learn something. So the guys from a compant called Tarent took LEGO mindstroms robots and made a plugin for the Eclipse development environment application, which allows you to get the LeJOS alternative firmware for LEGO robots running on them. The Lego Mindstroms platform offers a bunch of sensors and can control some motor units. So you can easily build robots with it. The guys from the Freedroidz project also built a simple to use Java library, so that programming a simple robot can be done by about 10 lines of code.

It was in I think 2010 that I first saw anything about freedroidz – it had booth at the “chemnitzer linux-tage” conference. I had a nice conversation with FSFE President Karsten Gerloff about this cool project could be made available to pupils. He involved Elmar Geese, CEO of Tarent, the sponsor and founder of the freedroidz project. Elmar invited us – me, my wife who is a teacher, and another teacher from my wife’s school – to Bonn. We sat and thought about what could be done. In summer 2010, The Freedroidz team came to our school and did a workshop with our pupils here.

After that, we and some members of the FSFE met again in Bonn and started the plan to bring Freedroidz to schools regularly. But the next planned event, at least in my region of Germany, was cancelled. I don’t exactly know why but as far as I know it shall be scheduled again the next months.

CW: Lots of people say its important for children to understand how computers work, but can be difficult to find a way of teaching them that’s fun for kids, can’t it?

BW: That’s the cool thing about it: even young kids can learn programming, without feeling like they’re at school. Our initial school workshop had kids aged from about 12 to 17, and they all had a lot of fun. The older ones built more complex robots and had to dig deeper into programming.

Another great thing: they can take all needed software home and reuse it when they have access to any LEGO mindstorms robot. So we not only taught them programming but also what it is that’s important about Free Software.

CW: And the whole thing seems like it’d be easy to pass on to other schools and teachers

BW: Definitely. I think that schools should share much more knowledge than they do. Free Software can be a good starting point!

“Schools should share much more knowledge than they do”

CW: You mentioned earlier that you’re not a coder. What attracts you to Free Software, and helping out with these projects?

BW: When I say I’m not a coder I mean I don’t call it fun to do hundreds of lines of code by myself. But as I studied computer science – and learned to code PASCAL about 18 years ago – I sort of can write code. So if I find a bug in a software, I sometimes get my ass up and do the fix by myself. Sure, Free Software is the fundamental basis for being able do that. I always want to have that freedom.

On the other hand our company not only does web hosting but also IT support for local customers. I installed some GNU/Linux-based boxes and few have been unhappy about it. So it’s valuable for me and future customers to identify the reasons that some people refuse to use Free Software, and that the bugs and so on are found, and if possible repaired for future releases.

Of course, when I find bugs in software that I’m using myself, I simply want them to be fixed. Reporting the issue is the first step.

CW: You mentioned earlier that in some of your early encounters with GNU/Linux, there were often bugs and problems?

BW: Do you know Gentoo GNU/Linux? It compiles all software locally on the computer it runs on, rather than downloading and installing pre-compiled binary packages. Hardware adjustment flags are set accordingly to the local CPU. So Software used on Gentoo systems gets compiled on many, many different systems with many optimizing compiler stuff. That process provides a great opportunity for bug hunting. It was a great resource for learning for me, too.

CW: What do you think those earlier experiences taught you about Free Software?

BW: Many things. Knowing that all improvements that are done on the software are relayed publicly and that all users can benefit, there’s much more motivation to report issues or to fix things.

Having the source code for software is also important. You can optimize the code to your computer architecture. That aspect of Gentoo GNU/Linux could only work with software released in source code, as we know. Of course, software that is available as source code, but which is not Free Software (and therefore may not be altered of improved) is not useful and hardly even worth mentioning.

“For me, the “Free” in Free Software is mostly about freedom to fix things for the public”

It’s a silly situation, and one I ran into, long ago. For me, the “Free” in Free Software is mostly about freedom to fix things for the public. Being able to get software updates free of license costs is a logical consequence of that.

CW: Do you think the importance of that is something which can only be fully appreciated by people who are programmers?

BW: Getting bugs in the software that you use fixed is clearly something that everybody appreciates. But it’s possible that plenty of people only want bugs be fixed because it benefits them. I think non-administrators that cannot get updated software for free – because they have to pay someone to install it – don’t care about getting updated versions free of charge.

But that’s perfectly okay. I think if a regular user calls me, shows me the bug and then gets a fixed version a few days later, then the customer appreciates Free Software. Even if he had to pay something towards it.