From the 8th to the 10th of May 2014, we represented the FSFE at the Linuxtag 2014. It was my first task as an intern and as such my introduction to the FSFE.

Generally it was a really valuable and exciting experience in the sense that I had the chance to learn and read about the various campaigns and activities of the FSFE as well as the many other initiatives taking place in other organizations. To give a more detailed overview of the individual days and possible improvements for the coming years, I have summarized them together with some comments below.

As a small disclaimer I should mention that I am lacking a reference to compare this event with, which might have lead me to perceive certain aspects differently from how others might have experienced them. Also, Linuxtag coincided with Droidcon and one day of re:publica. I am not certain whether this is usually the case, so it may be something to bear in mind.

Enough of the fine print, enjoy the read!

In an email we received prior to the event we were advised to arrive a bit later than the official setup time of 20:00. Upon our arrival at about 20:45 we were told that our booth had not been set up yet and that additional time was needed.

We then decided to talk to the builders of our booth and found out that they expected not to be done before around 1:30-2:00 at night.Since we had to finish the booth at 8:30 the next morning, we decided to leave our materials with a trusted employee of the building company and left to catch some sleep for the days to come.

We managed to set up the booth rather quickly, trying to make most of the limited space available. Around us all the other booths were set up and people got ready for the first day. 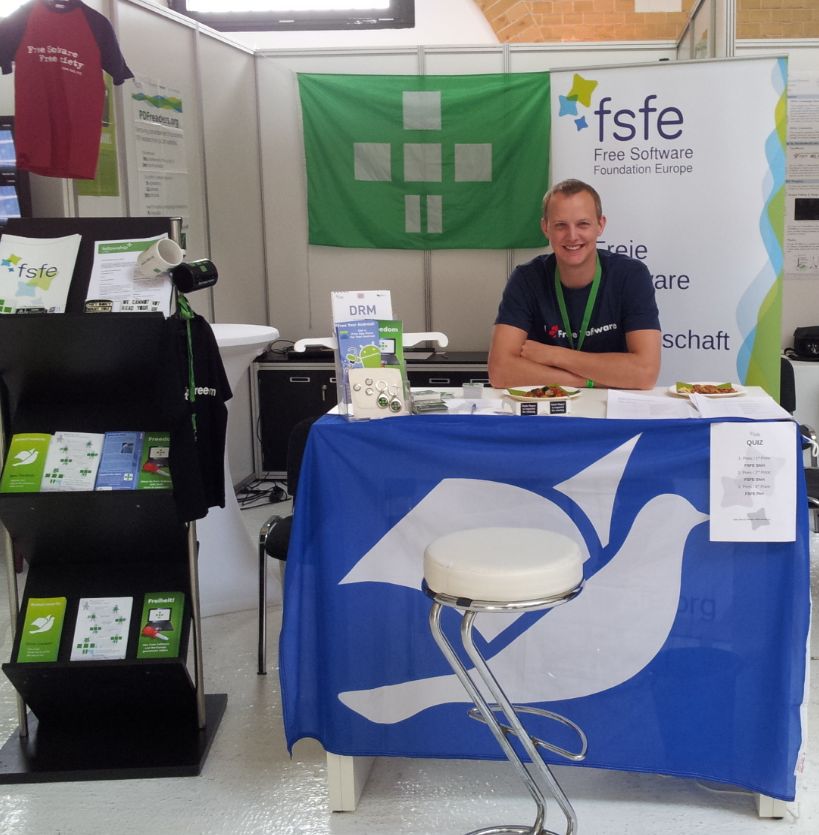 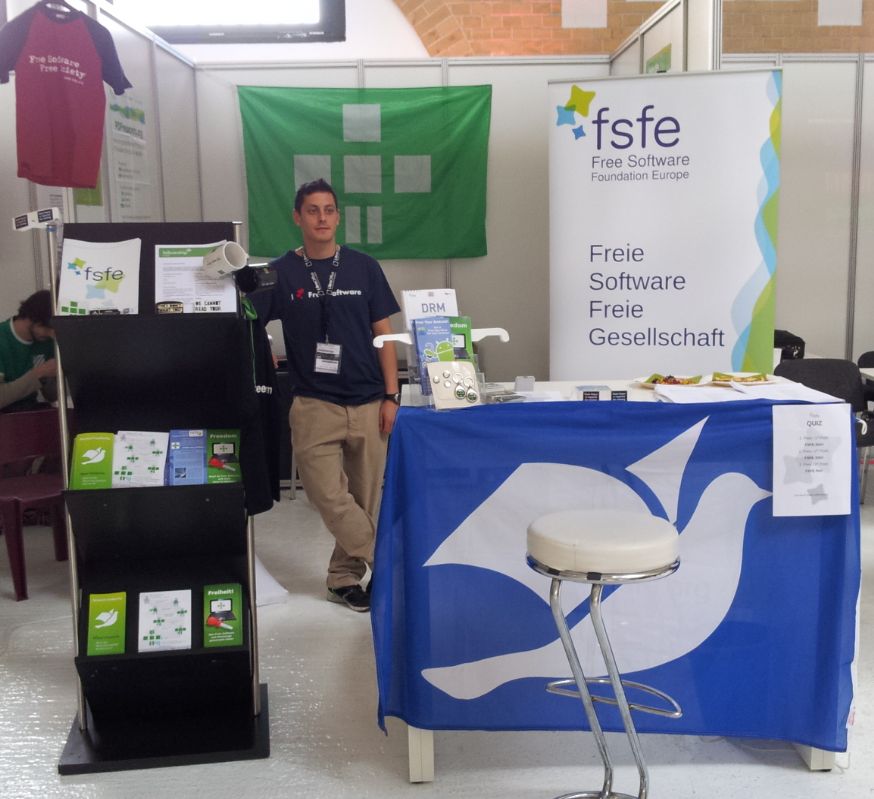 In my view this was probably the most exciting phase of the three days since I got to discover the many fascinating projects around us. One of the most interesting acquaintances were the friendly people behind http://www.rechenkraft.net/, a foundation that facilitates the scientific use of distributed computing power, since I had dealt with the the movement in my master thesis on protein folding software.

As this was the day that coincided with the Re:publica, the group of ‘non-experts’ was relatively high. This was beneficial for me since it gave me a chance to test my knowledge of the FSFE and its individual campaigns through explaining, which as I have recently learned dramatically increases the long term memorability of the subject matter at hand.

If I remember correctly, Thursday night was also the night of the party which I did not participate in since I was too tired.

On Friday, I took a good portion of the day to explore the stands that I had missed out on during the previous day and decided to join a few talks. Since I am more of a political science person, most of the talks were too technical with a few exceptions that dealt with issues of privacy in relation to the Snowden leaks etc.

As for the visitors at our booth, my estimation would be that there was a conversation taking place most of the time with a few quiet episodes in between. We could comfortably handle the amount of visitors and had enough time for each of us to occasionally leave the booth to explore the surrounding.

By the afternoon I was getting more and more comfortable with presenting the campaigns and topics and more and more people filled out the quiz we had brought with us. The latter consisted of six pages with about five multiple choice questions each, more about this in the conclusion.

Saturday was the community day with ticket prices being reduced from approx. 150 to 10 Euros. I expected this day to be the most busy one due to the comparably cheap entrance fee, however I have to admit that the big stream of visitors I envisioned did not occur.

Since this was the third and last day, most of the exhibiting parties had already visited one another’s booth and it felt a bit slow towards the end. We then decided to pack everything together and left.

As I have mentioned in the introduction, the Linuxtag was a motivating and interesting experience for me personally. I obviously cannot speak for the FSFE as a whole.

As I have learned, the sale of the merchandise was on the very low end, which would mean that measured by that factor, its value is very low. On the other hand, it appeared to me that the Linuxtag as a chance to encounter other members of the Linux movement served its purpose.

As for our booth, the leaflet that resonated the most with the visitors was the F-Droid leaflet. The quiz we handed out was also well-received, if a bit lengthy for some. The latter concern turned out to be unfounded as we had about 40 filled out quizzes by the end of the Linuxtag.

One thing that could certainly be improved upon in terms of the quiz is its educational value: Since one of the main functions of the quiz is to educate the participants on Free software, it would be great to have a way of giving them feedback on their answers. This could be done in a number of ways:

The first solution obviously means more work beforehand, the latter more work afterwards. Apart from this issue, the quiz contained several ambiguous answers that will be sorted out for the next time.