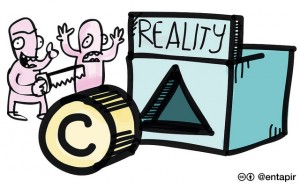 Copyright reform is in its full force. After the European Commission (EC) revealed its notorious plans to modernise copyright to address dying businesses age back in September 2016, the proposal has slowly moved to the hands of the European Parliament (EP).

With Malta being currently in charge of the EU council and copyright reform being its top priority, Maltese MEP Therese Comodini Cachia is leading EP efforts in copyright on behalf of the Committee of Legal Affairs (JURI). Her efforts are being noteworthy: from the task to bring the over-lobbied copyright reform to a more balanced form, to the attempt to do it in a fully transparent way (her Draft Report includes an annex of numerous lobby and advocacy groups who advised Comodini Cachia on the way). A 58-page long report is a lot to handle, especially for the weak-nerved. However, not less noteworthy, and I would say, even more remarkable is the Draft Opinion of the Scottish MEP Catherine Stihler of the Committee on the Internal Market and Consumer Protection (IMCO). Only slightly shorter from Comodini Cachia’s draft report (in length, but not on the content), a 43-pager includes several points and proposals, that JURI report is unfortunately falling short on.

One of the slightly more progressive points in the EC proposal is the proposed new mandatory exception for text and data mining (TDM) (Article 3). Well, at least the EC tried to give TDM a mandatory exception, but the efforts were completely neutralised in the same article by granting the rightholders an extremely broad right to apply any necessary technical protection measure (TPM) in order to “secure” their works. In addition to that, the scope of the new exception is extremely limited: the mandatory exception concerns only research organisations with the lawful access to the copyrighted works, and excludes everyone else with the same lawful access to copyrighted material.

The Draft Opinion rightfully states that “a more challenging approach” in regards to TDM exception should have been taken by the European Commission:

Furthermore, the rapporteur goes even further by attempting to limit the scope of dangerously far-reaching technical protection measures and proposes:

“a simple rule, which does not discriminate between users or purposes and ensures a strictly limited and transparent usage of technological protection measures where appropriate[emphasis added]”

As such, the suggested amendments to the EC proposal by the rapporteur Stihler expand the notion of TDM exception beneficiaries to include everybody, as in “any individual or entity, public or private, with lawful access to mine content”.

Concerning TPM, the rapporteur strictly limits their far-reaching scope in the amendment 32 by stating that:

“any contractual provision or technical protection contrary to the exception[…] shall be unenforceable.”

This is a significant improvement to the existing TPM and other digital ‘restrictions’ management (DRM) system established by the InfoSoc Directive (2001/29/EC); and to the currently proposed text in the EC copyright proposal.

The limited scope of TPM is slightly watered down in the Amendment 33 where the rapporteur proposes to strictly allow rightholders to apply TPM but only in the cases when these are to ensure security and integrity of the networks and databases where the works are hosted. The proposed amendment shifts the focus of the EC suggested paragraph to a more favourable situation when first, TPM cannot be used to interfere with legitimate exercise of TDM. Second, when TPM are to be used, then only in exceptional circumstances for network and database security.

The Draft Report by Comodini Cachia proposes to delete the mentioning of TPM in TDM exception. This is a semi-favourable approach, as essentially avoiding TPM does not address its shortcomings in existing framework established by Info Soc directive that does not protect any exceptions from far-reaching TPM. Hence, the explicit restriction on digital restriction as proposed by the draft opinion is a much more stronger stance in the right direction.

EC initially proposed a completely arbitrary quasi-copyright for press publishers (“neighbouring right”) for the digital uses of works authored by journalists, justifying it with the need to “ensure the sustainability of the press publishing sector” at the expense of online services (Article 11). This is a clear indication of copyright gone too far, when being an author is not enough in order to reap benefits of one’s intellectual creation. In fact, authors are not even once mentioned in the EC proposal. The focus of copyright in the digital age, according to the EC, has shifted to industries and ‘intermediaries’ in a broader sense.

The rapporteur Stihler is, however, not convinced by the EC reasoning, and believes that “introduction of a press publishers right under Article 11 lacks sufficient justification.”

The Rapporteur believes that there is no need to create a new right as publishers have the full right to opt-out of the ecosystem any time using simple technical means.[…] There are potentially more effective ways of promoting high-quality journalism and publishing via tax incentives instead of adding an additional layer of copyright legislation.

The proposed changes to the EC text are, thus, deletion of Article 11 that introduces new ancillary right to press publishers.

The Draft Report, unfortunately, is less ambitious in this regard. The rapporteur Comodini Cachia proposes to replace neighbouring rights for press publishers with the right to bring proceedings in their own name before tribunals against infringers of the rights held by the authors of the works contained in their press publication and to be presumed to have representation over the works contributed. This essentially gives publishers the right to use other people’s copyright to go after everybody they consider to be an ‘infringer’.

Current framework for Internet Service Providers’ (ISP) liability for the actions of third parties who use their services to infringe copyright is set in e-Commerce Directive (2000/31/EC). According to e-Commerce rules, the ISPs enjoy certain amount of ‘safe harbour’ when it comes to the actions performed by their users. In addition to the ‘safe harbour’ there is no general monitoring obligation to actively seek for copyright infringements on their services, inter alia prohibited by the European Court of Justice. However, the IPS need to act accordingly as soon as they obtain knowledge (or should have obtained such knowledge) of potential copyright infringement on their services (so-called notice-and-take-down procedure).

With the copyright reform, the EC promised not to touch e-Commerce and the rule of intermediary liability, however, the proposal indicated the opposite. The EC imposed on *any* ISP that *stores and provides to the public access to large amounts of works or other subject matter uploaded by their users* an obligation to take [technical] measures to ensure “functioning of agreements concluded with rightholders for the use of their works”. The EC is even going further by explicitly mentioning the technology that might be compliant with that article: content ID, mostly used by YouTube (aka Google). It is noteworthy, that Google itself has stated that technology is not the answer when it comes to such sensitive matter as copyright exceptions and users’ rights. Furthermore, technology cannot be built to do lawyers’ job and verify whether the claimed content actually belongs to rightholder.

The aforementioned provision has received much of a backlash, mostly due to the fact that it goes against and beyond e-Commerce Directive, and all existing jurisprudence concerning prohibited monitoring obligation, making the proposal, hence, highly questionable in legal sense.

The rapporteur Stihler has duly recognised the imbalance and the inherent incompatibility of Article 13 and existing legal framework:

The Rapporteur firmly supports the notion that the value gap has to be addressed and emphasises that creators and rights holders are to receive a fair and balanced compensation for the exploitation of their works from online service providers. However, this should be achieved without negative impacts on the digital economy or internet freedoms of consumers. The current wording of Article 13 fails to achieve this.

The proposed measures are also very technologically specific, according to the rapporteur Stihler:

The use of filtering potentially harms the interests of users, as there are many legitimate uses of copyright content that filtering technologies are often not advanced enough to accommodate.

The proposed Article 13 is, hence, modified by the Amendment 63 that recognises the ‘safe harbour’ provisions and the prohibition of monitoring obligation under the e-Commerce Directive.

The Draft Report also addresses the Article 13 in a slightly similar manner, however, it does not address the technical neutrality in the same way as the Draft Opinion. The ‘measures’ the amended Article 13 is referring to are not balanced with prohibition of monitoring obligation as in Draft Opinion. In addition, the focus of the article in IMCO Draft Opinion is completely shifted to the balanced agreements between service providers and rightholders, while the JURI Draft Report follows the rationale of the EC proposal: appropriate and proportionate measures to ensure the functioning of agreements concluded with rightholders for the use of their works. While the difference seems to be minimal, it is actually crucial to shift the discourse in a more technologically neutral way by emphasising the conclusion of ‘balanced agreements’, rather than an obligation to impose merely technical ‘measure’.

In addition, the Rapporteur Stihler proposes a completely new exception in the Article 13 specifically designed for ‘user generated content’ (UCG; amendment 66) that is completely missing from the EC proposal, nor the JURI Draft Report:

UCG is a pure creation of online environment and its recognition is one step towards a reasonable modernised copyright framework that adapts to the changing digital environment and realities, instead of frantically trying to punish us for moving forward in our creative thinking online.

IMCO Draft Opinion has addressed several shortcomings of the EC copyright proposal, however, it is only one of the voices within the Parliament. Consequently, it is still up for vote in the committee after another round of amendments from its members. On the other hand, the aforementioned Comodini Cachia’s darft report – the main Parliamentary effort – is less ambitious in its wording, although it does attempt to address the main shortcomings of the EC proposal. The copyright saga is, hence, far from over.