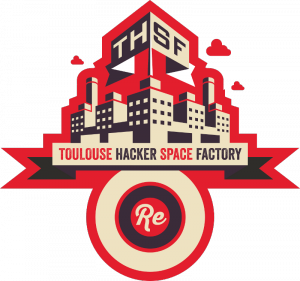 From mai 22 to 26, FSFE sent me to the Toulouse Hacker Space Factory, in Toulouse, southern France. It was probably the best hacking event I have been to.
Taking place in Mixart Myrys, a former artists squat, the public was very diverse: from hackers to activists to artists to high school classes.

The booth
The booth itself was quite small (a simple table) but it was at the entrance of the main area, an ideal spot. But for occasional help from friends, I mostly managed it alone.
Fortunately, the two first days’ low attendance allowed me to get to know many hackers, who later helped a lot.
It was probably way less pretty than during other events: I forgot the posters in Berlin Tegel’s toilets. The first day, we made a Free Software Foundation Europe banner by hand and hanged some Tshirts on the wall behind the booth. It fitted perfectly with the do it yourself culture of the event, but I was still disappointed no to have posters.

Thursday-Friday
The first two days were mostly focused on conferences and workshops. I only used FSFE’s political material, to be able to move and go talking to people without letting goodies at the booth. I had the chance to talk about Free Software with a class of teenagers visiting the place and to get introduced to hackers coming from every corner of the country.

The workshops were about some arduino hacking and about building a network. In Toulouse, one can get internet through an association called Tétaneutral. They are part of the federation initiated by FDN (French Data Network). They built their own (neutral) network and are showing and teaching people what is internet and how it physically works. Thanks to the hours we spent discussing and debating at night and thanks to a 2 AM private workshop in Myrys’ basement where we welded optical fibres, I now understand a lot better what internet is, logically and physically.

Week-end
The atmosphere during the week-end was very different. It was badly crowded and there were people coming at the booth all the time. I loved the fact that most people didn’t know anything about FSFE, and quite many didn’t know much about Free Software in general.

Talking to people who are not already convinced is a great pleasure.

I had a binder with most of the important articles on fsfe.org printed. We installed several chairs near the booth, and people came around, sat, had a drink and chatted there. Our booth became the meeting point of several hackers, who often helped me answering technical questions. Their technical knowledge and my understanding of FSFE’s work were a perfect mix. Several times discussions started at the booth kept going on in the improvised café next to it. Our booth became a social place!

Merchandising
For most people it was the first encounter with FSFE, I didn’t want to make them run away by talking about money right away. It still worked quite well.

Following up
Several people took the fellowship leaflet and seemed interested. Five subscribed to the newsletter.
As always, the most satisfying part was all the informal links created! The hacker community is full of awesome people, I am glad that we had the chance to meet. I hope that some of them came a step closer to FSFE!