Just how transparent does the European Parliament have to be?

In its own rules of procedure, the Parliament has set itself the high standard of conducting its affairs in “utmost transparency”. But what does this mean in practice?

For five years running, the Green group in the European Parliament has celebrated Document Freedom Day together with us. The focus of  yesterday’s event was a recent study titled “Ensuring utmost transparency – Free Software and Open Standards under the Rules of Procedure of the European Parliament”. I recommend that you get the PDF and read it for yourself — it’s well worth your time. 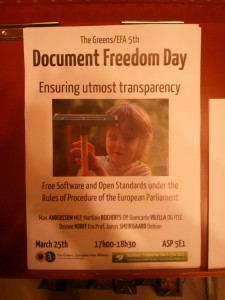 Thanks to MEP Max Andersson, his assistants, and the always wonderful Erik Josefsson, we had a great panel lined up. With Professour Douwe Korff and lawyer Carlo Piana, two of the study’s authors were present to run us through the findings. The study brought many important results.

Why Open Standards and Free Software are essential for transparency

It points out that “utmost transparency” isn’t the same as making information available on request. Requests for access to documents (or Freedom of Information requests, as they’re called elsewhere) belong to the traditional approach, where information is secret by default, and you might get an exception if you ask really nicely.

This might have been acceptable in a pre-digital era, where information largely lived on paper, and gathering, storing and publishing it was expensive and difficult. Today, much of this work can be automated. It’s no longer acceptable to reveal information only when someone happens along to ask for an item in precisely the right way. Information about making policies and laws needs to be public by default.

The study argues that Open Standards are necessary for the Parliament to achieve its goal of “utmost transparency”. The lawmaking process is only really transparent if it can be analysed and reviewed by anyone, on any software platform, without having to ask anyone for permission. This is something that only Open Standards can deliver.

The authors highlight that transparency isn’t a state; it’s an ongoing process. In order to continuosly deliver transparency through Open Standards, the Parliament needs to avoid being tied to any particular IT vendors. Instead, it should use Free Software wherever possible.

How the EP does on transparency – inside and outside views

Four panelists were there to discuss the study, and think about how its results might be put into practice.

He highlighted that he wants the Parliament to be “avantgarde” in IT, taking leadership on transparency and openness among the European institutions. For all the things we at FSFE wish the EP’s IT systems would do better, I need to point out that the Parliament is indeed doing better on this front than the European Commission, let alone the Council, which sometimes seems to communicate its work to the public primarily through leaks. Now if the Parliament could only get its live streams of plenary sessions working for Free Software users, and make them easily accessible… 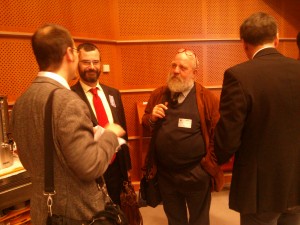 Martine Reicherts is the Director General of the EU´s Office for Official Publications in Luxembourg, and a former European Commissioner for Justice. She talked about her office’s effort to make EU legislation available and searchable in a way that’s useful for specialists. She said that it took her four years to make European law texts available free of charge. The publications office’s current challenge is to make the data searchable: “If you know a search engine that can efficiently handle 1.3 billion triple-store sets, let me know.”

Jonas Smedegaard is a Debian developer. He has worked quite a lot on the practicalities of making the EP’s systems more transparent. He created the DebianParl distribution, a version of Debian GNU/Linux aimed at people working in the Parliament, and has maintained a constructive dialogue with DG ITEC on actually getting the thing working. (“Constructive dialogue” is Brussels lingo for “an ongoing and sometimes lively argument”.) With his experience at the coalface of transparency, he had quite a few suggestions to make as to what the Parliament’s IT systems could be doing better — especially using standard protocols to handle email, rather than Microsoft’s proprietary tools.

I was the final speaker on the panel. With most of the practicalities addressed, I took the opportunity to make a few broader points:

Looking at it this way, Villela’s DG ITEC isn’t just running the EP’s IT systems for the Parliament’s own use. These way these systems are built and run determines how much access Europe’s citizens get to the lawmaking process, and how well they can understand it. These systems play an important role in determining the political legitimacy of the European Parliament, and by extension of the other EU institutions.

That’s a large responsibility for an IT department to carry. But there you have it.