On March 29, I had the pleasure of giving a talk at the annual conference of the Turkish GNU/Linux Users Association in Istanbul, Turkey. This was a pretty interesting time to speak about freedom and technology. 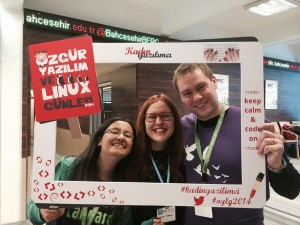 Local elections were scheduled across the country for the following day. The government had blocked both YouTube and Twitter. This largely had the effect of teaching Turkish Internet users about VPN, DNS and Tor. Tor usage numbers in Turkey doubled during the week leading up to my talk.

In my talk, I discussed the relationship between technology and power. The same technology that we are using to liberate ourselves is being used by states and corporations to monitor and control us.

In a nutshell, the spies are largely doing what they were trained to do. It’s the politicians – and therefore, in democracies, us as citizens – who have failed to limit the spies’ invasion of our privacy.

In combination with what Bruce Schneier has appropriately labelled “the public-private surveillance partnership“, this means that our privacy is under threat. Having privacy is essential to our ability to freely decide how we want to live our lives.

I concluded that in order to live in freedom, we need to recover ways of reading without being watched, and decentralise the locations where we store our data. We need to make laws that strengthen our privacy, and further develop the technical tools such as encryption that make those laws effective. These same tools will also give us cover while we  undertake all these efforts.

(All this is something I’m planning to write up as an essay as soon as I get the time. Hah.)

The audience reaction was pretty strong, as you could expect from a young, educated, technically minded group where people are clearly fearing for their country’s future. Many of the people in the room had probably been protesting on Taksim square in 2013, and were acutely aware that that future depends on them.

One of the details from my talk even made it into the national press the next day. I had mentioned that Turkey is probably using a border control IT system that it received as a gift from the United States – on condition that Turkey shares the data on who enters and leaves the country with the US government. Seeing this plastered across the front page on election day was an interesting experience.

And finally, thanks to the very inspiring Nermin Canik for being a great host!