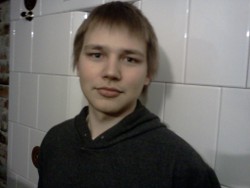 Heiki Ojasild joined the Free Software Foundation Europe in 2011, undertaking the task of translating fsfe.org into Estonian, his mother tongue. He is currently developing an XChat add-on, as well as a website for free SVG and JavaScript games. In 2010 he took part in the Baltic Olympiad in Informatics. I talked to him about copyright, Digital Restrictions Management, kopimism, and activism.

CW: How did you first become involved with Free Software?

HO: I vividly remember, years ago my nephew cousin told me about GNU/Linux and I couldn’t believe it worked the way it did. I thought that computers couldn’t function without Windows. At the time it seemed such a strange concept that I didn’t pay much attention to it, even after he had demonstrated it to me.

It was a couple of years before I learned to code and started participating in informatics competitions. Then, at first, learning to use GNU/Linux became a status symbol for me. I just thought that I would be cooler using it. Gradually I realised I had less crashes and trouble with Linux. By the time I had talked my mother into buying me a personal laptop, I had made a decision to go with GNU/Linux as the main system and saved her the Microsoft tax. I was 15 at the time.

At first, I was just awed and accepted everything in Stallman’s essays as gold. Nowadays I am a bit more critical, but I am still convinced that Free Software is the future.

“learning to use GNU/Linux became a status symbol for me”

I became involved with FSFE when I spotted a blatantly incompetent Estonian translation on the FSFE website. That was in August 2011. I reported it and Nicolas Jean (FSFE’s Web Team Coordiantor) removed it and told me that I would be welcome to translate the website. For some reason – a personality flaw, maybe? – I couldn’t decline.

Gradually I grew closer to FSFE and became involved with both translations and website maintenance. At some point in October 2011 I arrived at the conclusion that I should join the Fellowship. I probably just fancied the @fsfe.org mailing alias. I became a Fellow, And I have been growing more attached to the FSFE ever since.

CW: What are you working on at the moment?

HO: On the FSFE side, I am currently translating PdfReaders.org into Estonian. I’m also trying to persuade my friends to do the same. At the same time, I’ve been scouring the web for proprietary software advertising on Estonian governmental institutions’ websites, as part of the PDF Readers campaign. I have some new targets waiting in the queue because I want to finish the translation before contacting them. I occasionally contribute improvements and translations to the main website. Mostly I tend to blog about issues that are dear to me. On the technology side, I have been trying to work on an XChat add-on and I am planning to launch a new website for free SVG and JavaScript games.

These projects are low priority, however. Activism is far more important to me at the moment, and there are lots of thorns in my side as well as interests: proprietary software advertising, proprietary software in schools, skepticism, copyright, pirate parties, secularism, and kopimism are just a few favourites. Since Jessica Ahlquist won her case to remove the prayer banner in her school in the U.S., I have been contemplating possibilities to stop schools in Estonia from supporting religion, even if they do it only during Christmas. I am also considering trying to register a kopimistic church in Estonia. An achievement in one of the subject areas dear to me has the effect of increasing my attempts in all of them. Activism is certainly contagious!

CW: So your primary interest in Free Software relates to political activism?

CW: The ‘E’ in FSFE of course stands for Europe. How European do you think FSFE is?

HO: The technical set-up is certainly sufficient to be pan-European. The legal and social situation…well, if one takes a look at the team page, it is evident that representatives of many European countries are part of the FSFE. However, the situation could be better. FSFE needs to find a way to expand our activities into all of the European countries. And I have no magic solution to that problem. Nevertheless, the culture of FSFE is certainly European. It is open, welcoming, and democratic.

CW: How important do you feel your translation of fsfe.org is?

HO: I’m not sure. On the one hand, most Estonians can speak and understand English well enough that they could probably understand a lot of materials in English in the first place. On the other, if we want to distribute the materials in Estonia and reference them in communications, it is only polite to ensure maximum reach and comprehension. I am also of the opinion that as we translate the materials and develop local terminology, the issues become easier to understand for people, and it becomes more likely that people will get involved in our work. It is certainly important to increasing the amount of people perceiving FSFE as being European, rather than German.

CW: Increasing the perception that each country has an equal role in the organisation, you mean?

CW: How well known is Free Software in Estonia?

HO: Some packages are well known, like Mozilla Firefox. Lots of people here have heard of Free Software. Unfortunately, most of them have several misconceptions, chief among them the misunderstanding of Free Software being about price, not Freedom. It is also common to generalize one’s impressions and common hearsay into what Free Software is, instead of adopting the position held by the FSF and FSFE, or reading the individual software licenses. Also, as far as I know, most primary and secondary education providers use and teach proprietary software.

CW: Is perception changing? Is it on the government agenda?

HO: As far as I know, it is neither changing nor on a government agenda. There exists some ancient document that calls governmental institutions to use open document formats but that is not followed either. Probably Estonian MEP Indrek Tarand is the only Estonian politician who could be regarded as having an understanding of Free Software and doing something for it. He started the European Parliamentary Free Software User Group and is their patron. The user group certainly helps to promote Free Software in the public sector by offering support to Free Software users. It is not much, but it is more than most Estonian politicians can claim to have done.

CW: What excites you in the world of Free Software at the moment? You’ve switched to YaCy recently I notice.

HO: Everything. Google’s actions have clearly demonstrated the need for new and distributed search engines, and that has made me switch to YaCy. Google’s attempts at mixing search results with their other products are anti-competitive, and in case of the last tweaks to the Personalized Search, actually deteriorate the user experience. Their early commitment to the users has been replaced with a commitment to the shareholders, who want more profit from the company’s products. That commitment to the shareholders has caused both the Buzz fiasco and now the integration between search results and Google+. Google might have the best web index at present, but I cannot trust Google to provide me with the most relevant results any more. So I switched to YaCy.

I also enjoy pretty much anything interesting related to cryptography, steganography, and otherwise “sticking it to the man”. I’m currently keeping an eye on the Amazon Kindle jail-breaking community. I hope someone manages to jailbreak the K4. I got it for Christmas, and I am plainly horrified by how locked down and crippled this beautiful device is. When I asked for the device, I was thinking I could exorcise the undue influence Amazon holds over the device, and effectively get subsidised hardware. I was a bit naive. Though I still hope I will manage to cut Amazon out of the loop one day, encrypt the file system, and fill the device with Project Gutenberg e-books.

CW: The Free Software / Free Hardware issue is such a difficult one. Is enough work done to explain the link between software and hardware and promote the idea of Free Hardware over vendor lock-in in your view?

HO: Yes and no. The FSF has certainly warned people about the dangers. However, I believe that DRM should be outlawed. As long as companies are allowed to keep users from writing and running their own software (which would cut into their profits), that’s what they’ll do.

CW: You’re a fan of Wittgenstein. Do you think of computer code as a language in the way that Wittgenstein talked about language?

HO: I think of code in the same way as any other language, only less ambiguous. Though, obviously the C++ standards committee did not wish to succumb to English, and thus invented undefined behaviour. Regarding freedom, I think that all data must be free.

All data, regardless of its meaning, can be applied in a manner sufficiently tool-like to require its ‘freeness’, if we use the tool discourse. Should we use a discourse establishing free software as a thing in itself, it would be too strange for me to comprehend. In my opinion, freeness of information is natural. Copyright is the result of deviant and misguided politics. And nowadays abolishing copyright is political because people have become used to copyright existing, and they do not see the need to justify its existence.