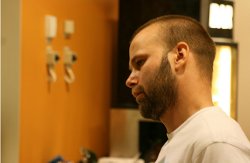 Rikard Fröberg used to work in the IT industry as a consultant and teacher, but in the late 90s changed his focus to Free Software and free culture. He helped start up Gnutiken, and has helped organise FSCONS for the last three years. Currently employed by The Society for Free Culture and Software as a project manager, Rikard is managing a project for increasing accessibility at events.

Chris Woolfrey: You’re currently working at The Society for Free Culture and Software (FFKP), and you’re involved with a number of grassroots projects, such as Cloudberry. How important do you think it is that Free Software has an active and engaged network of users?

Rikard Fröberg: Speaking as an FFKP employee, I have to say it’s not only important, it’s imperative for Free Software to provide contexts and meeting spaces for users and developers alike, so that they can exchange ideas and gain understanding of their respective views. Not that every Free Software project would be nothing without engaged users, but many projects have such a large user-base that it would be a waste not to have some form of interaction with its many users.

But that interaction sometimes needs managing. Some projects and pieces of software have staff and officials from municipalities, regions, and even states, as part of its user-base, and that might actually pose a challenge for the community, and its interactions with that kind of user-base. Government officials, for instance, might not be familiar with the tools and culture for participating in user communities, such as filing bugs on some bug tracker,
or filing feature requests on a mailing list. Here, I see the need for some intermediary forum where representatives from the Free Software community can meet with the end-users on more equal terms and with means more familiar to such end-users in terms of how they generally approach and discuss things with providers of software and services.

CW: Does the Cloudberry project aim to fulfil this role with artists and musicians?

RF: Cloudberry is an effort to include the artists and copyright holders in the discussion of how their works will, could and should be shared among their public. At an earlier stage of Creative Commons (CC) history, most of the promotion and information around the models and licenses came from lawyers and tended to have a strong focus on law in general and intellectual property law in particular. These are topics which do not appeal to all artists and producers of artistic work. Here, Cloudberry reaches out to hear their side of the story in order to adopt and incorporate their narrative, needs and reality into the discussion and description of CC and its licenses.

On the other hand, a great deal of the work that is being shared with CC licenses is shared on and found via the Internet. And many of the people engaged in remixing of other people’s work both find and share their works online. So, the users dealing with works that carry a CC license, in many cases, act on and through the means of technology and could perhaps thus be considered technical users.

The idea behind the Creative Commons needs to find its way to the more technically inclined crowd too. Even if the younger generation – sometimes referred to as digital natives – are technologically savvy, they may not be as aware of how copyright works.

Many innovations and services are created around artistic work: film, sound and photos. Using CC for licensing schemes actually opens up a whole range of new
technical innovations as well as new business models. Flickr, for instance, recently proclaimed they have over 200 million photos with some kind of CC license. Technical users in a wider sense definitely must be part of CC’s target groups.

The Creative Commons needs to be able to communicate its ideas and workings to a broad range of audiences, all the way from those who create, via those who consume and enjoys their work, to the technical innovators and also actually businesses. And then I’ve not even touched upon states , governments, the academia, and policy makers…

CW: How does Free Software fit into that model of free culture? Is it the most important, or maybe the most fundamental component?

RF: I think some of the strengths of Free Software are ideas and ideals which are shared by other instances of free culture. We have CC with its reformative licenses, Open Access, and even movements touching upon much more earthly matters, such as Open Source Ecology.

The FS movement, though, was early in formalizing the ideas around the freedoms of something as immaterial as code. Much of what runs and influences our daily
lives involve software. We have the Internet and the de facto infrastructure for many forms of communication and exchange of knowledge that takes place there, such as mail and the web. And more and more people, at least in the West and the industrialized world, carry around in their pockets a phone which is also a computer (connected to the Internet no less). So it’s hard to ignore that software is a key part of culture and our daily lives, so Free Software of
course is an important and fundamental part of a free culture. Is it the most important? I can’t tell, but it’s obvious that different fields of free culture influence one another, so perhaps the most important thing is to keep that
exchange of ideas going.

CW: An important feature of the Free Software movement is that people from all over the world can work together in online communities. Do you consider it a problem that typically such communities rarely meet physically, in order to discuss ideas and benefit from each other personally?

RF: It might be the case. The Web might be labelled “social” by some, but we should never underestimate the power and impact of meeting with each other face-to-face. Online discussion, in my opinion, has a weakness in that it lacks the subtleties and nuances of conversations that take place in a physical meeting. It can lead to misunderstandings and lengthy discussions over details, and I also think that, often, a culture evolves in online communities and mailing lists which can be exclusive, or stand in the way of people who aren’t comfortable or familiar with the jargon and these sometimes informal cultural rules.

Physical meetings, I think, allow for more interaction between people from different groups who do not necessarily share the same interests and background, because most of us already have a grasp of the social protocol away from the keyboard. And it’s fun to meet with people, I think.

You need both online communities and physical meetings, I guess. The benefits from the online communities are, obviously, that you do not need to travel to interact with people in different time zones, and the asynchronous nature of electronic communication allows for people to not even be awake at the same time, while still engaging in the same discussions.

CW: Is the primary benefit of FSCONS that it provides an opportunity for such real world meetings?

RF: It’s not for us to say, really. But from what we hear, many visitors and speakers appreciate the social interactions and unexpected meetings
that do occur during the conference. Also, we hear a lot that the broad range of topics makes the conference stand out compared to many purely technical conferences. We also try to create natural meeting spaces and allow for such interactions when planning the schedule and venue layout. And we do arrange social events every evening of the conference for exactly this reason; we feel that the physical meetings are a key component in our conference.

The schedule is filling up, and I think we have a broad range of topics this year. I’m managing a track called ‘Universal Design – Aiming for Accessibility’. I’m sure we’ll present something therewhich will attract some attention. Personally, I think there’s several exciting tracks this year. We have the ‘Future of money’ track, which should be both timely and intriguing, with talks on Bitcoin and Flattr, for instance. And then there’s ‘Free Software in Politics’, co-arranged with the FSFE, with a whole range of interesting sessions. I’m also interested in the ‘Human Rights and Digital Freedoms’ track, which has plenty of interesting talks and presenters in it. But I guess there’s something for everyone, and I just wish I’d have time to attend them all. We have two excellent keynotes: Christina Haralanova will present a talk on ‘Hackers for Social Justice’, and Richard Stallman will give a session in a format you are not used to see him doing at keynotes around the conference-sphere…but more on that will be presented soon on the conference website.

Experience tells me that the FSCONS planning starts a week or so after the wrap-up of the previous one, so expect us!