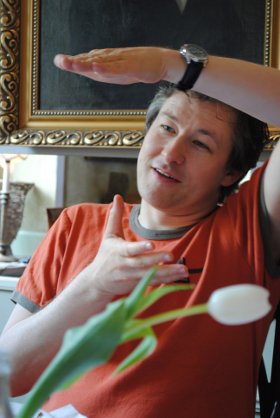 Bernhard is founder and Executive Director of Intevation GmbH, a company with exclusively Free Software products and services since 1999. He played a crucial role in the establishment of FSFE as one of its founders, and architect of the original German team. Beside that he participated in setting up three important Free Software organisations: FreeGIS.org, FFII, and FossGIS.

Chris Woolfrey: You were a co-founder of FSFE in 2001. In your view, has the organisation been achieving its aim? It’s still largely unknown to the public.

Bernhard Reiter: When setting out to change the world, you can’t expect it to jump right away. And I believe FSFE is becoming increasingly known. When setting up FSFE, we did not know precisely what we would be able to achieve, we just tried our best. Could we have reached more? Did we dream about being larger, more influential, having more Free Software everywhere? Yes of course! Still, I believe FSFE can be proud of what it has achieved. And we stayed within the original goals.

Most of FSFE’s successes stand for themselves. We wanted to be a reliable organisation, which would be able to motivate people to stay within FSFE for a long period of time, and to be able to do a lot with just a little budget, but a lot of dedication.

My friend Georg Greve (founding president of FSFE) is a great example of that. He was seminal in FSFE’s success. He’d just finished his university degree and we managed to convince him to work for FSFE full-time – letting go a career as a physicist – and he worked without getting the promised pay for a long while, building up personal debt until we found our first visionary sponsor. We knew that for FSFE to be successful we would need to have an anchor person and Georg agreed to be that person. He did it well. People who worked against the organisation thought that they would only have to handle this single person, but he had the full power of ten thinkers and many more volunteers behind him. When FSFE decided to support a particular argument or political position, Georg presented it with personal passion.

Of course, funds have always been important too; finding the first visionary sponsors was very hard. One of the first was Daniel Riek, who saw the potential and gave us a one time donation to cover some set-up costs. Then there was Reinhard Wiesemann from the Linuxhotel, and you have to know that Reinhard is a self-made entrepreneur and critical thinker: he was more into doing something practical for helping Free Software like writing another document format converter, and there I was trying to get some money from him to do “political work”, which sounded like it meant “just talking”. Here was me and a bunch of guys with a new organisation that only a very limited track record. In the end I managed to convince Reinhard, and then we were able to pay Georg a little bit.

I am really grateful for all that support during the early days; FSFE would not have taken off otherwise.

CW: Would you say that plurality – people from all walks of life becoming involved with FSFE – is one of the organisation’s real strengths?

BR: I’d say the opposite: that we are still, as a group, too homogeneous. Most of FSFE’s members have very strong technical IT knowledge, and are young and male. Compared to most other Free Software related initiatives, though, I believe we are doing fairly well, because we do have a significant number of non-programmers, and females, and people more interested in the non-technical parts, as part of our organisation.

We wanted to bring Free Software into the mainstream, and so FSFE has had to be very approachable from the point of view of “society”, general journalists, companies and politicians. When you are technically trained it is easy to become arrogant towards less computer savvy people! We tried hard to avoid this, so that we could relate to and relay how non-computer people might think and feel.

CW: Ten years later has FSFE succeeded in being approachable? Do you think ‘ordinary people’ are aware of issues of digital freedom?

BR: Yes! Over the last 10 years FSFE has been approached often, and we’ve given many interviews and talks, and explained the importance of Free Software for society to many, from the local community party table, to companies and public administrations of all sizes, plus the military and the United Nations.

Topics like electronic data processing, software and its relationship with the economy, democracy and society, and the power of all these tools, has increasingly gone public. More people care about them now. Many regular daily newspapers mention Free Software or FSFE. There is almost nobody that hasn’t heard about GNU systems, Iceweasel, Libreoffice or Free Software – often by other names, but still.

Personally I am convinced that there are no ‘ordinary’ people or ‘regular’ users. Humans are much more diverse and should not be treated like a big group. Most people do care about their freedom. If they do not understand why their use of computers and software is related to this, then it’s because nobody has explained it to them properly.

“if people do not understand why their computing is related to their freedom, it’s because nobody explained them properly”

Free speech and the ability to read and write are considered very important. Software is in the same category, but this is not yet taught in school, so we don’t have the great literature on the subject. Yet.

CW: After ten years you’re stepping down from your post. Why?

BR: I have been a volunteer for FSFE since shortly before it was officially born. More than 10 years; it is a long time. Some of the administrative work started to get boring. The work with volunteers stayed fun.

You start to realise that you can’t do this forever anyway, so you start thinking “where is the next person”? The big break was two years ago, when our first anchor person stepped down and we basically got the second generation taking over the full leadership of FSFE. It was important then to not stand in the way when people like Karsten Gerloff (current FSFE president) and Matthias Kirschner (Fellowship Coordinator and German Coordinator) came in and had to find their own style for leading FSFE.

They were the future. I was staying in duty as Matthias’ Deputy, mainly to help him. Matthias is doing great, and he’s now surpassed me in many respects. This year, with Torsten Grote (Deputy German Coordinator) we’ve found a great new Deputy.

Beside my voluntary work for FSFE, I’ve been running my own company, Intevation, which also grew, demanding more time. We are currently about 25 full-time staff. I owe them a big thank you. My co-owners Jan-Oliver Wagner, Frank Koormann, and all the employees allowed me to help FSFE in my work time, to have Intevation cover travel costs and to become a patron of FSFE. Intevation also holds shares in two daughter companies: Greenbone Networks, which sells a product for security compliance based on OpenVAS, and Kolab Systems AG, which provides the well known groupware Kolab. Georg is co-owner and CEO of Kolab Systems. All three companies are respected Free-Software-only businesses.

I am staying with FSFE, but not on constant duty. Now I can pursue more long term issues within FSFE. I’m seeking new ways to get all the interesting brains that make up FSFE together. In the beginning when our group was small, we could have long conversations on our internal mailinglists but now that FSFE has grown, this mode doesn’t work.

I want to investigate how we can finance Free Software, especially boring maintenance work and larger innovate steps. There are a number of issues people would like me to write articles about: cloud computing, and the future of web applications, are raising a number of questions. Maybe I’ll start blogging.

CW: Given the good work of the people you’ve mentioned, should FSFE be increasing its number of professional staff?

BR: Our long term goal is that FSFE is not necessary any more; in a world where our message is mainstream. But I’m sure we’ll have to grow over decades for that to happen, both in terms of professionals and volunteers: we must have them both. Some goals can only be reached when you are organised, systematic, resourceful, and to the point – this includes a lot of boring work and structure – and other problems are better solved by a large number of people contributing a little. Sometimes just their ideas or opinions.

Early on it became clear that for the coordination and for anchoring within politics, FSFE would need to have professionals. But it is about paid staff and volunteers together.

A paycheck allows someone to have more time to dedicate to what they like to do and would do, anyway, as a volunteer. More volunteers, donors and Fellows allow us to pay more people, who in turn help to spread the message to find more help.

“Our long term goal is that FSFE is not necessary any more; in a world where our message is mainstream”

CW: Proportionate growth, then. But how do we go about financing Free Software projects, particularly when they require less interesting work to be done that may not suit a volunteer?

For organisations, especially companies, I recommend they pay 10% of what a proprietary license for a comparable product would have cost them. Remember, you would have had to buy that product for 100% and your business would still have to work. Give 1% of the revenue (not profit) back to the Free Software components that you have used to create the IT-solution for each project.

We should be experimenting with App Stores so we can see if people are willing to pay for Free Software a bit this way. Making voluntary payments is still way too hard. Maybe your GNU operating system distributor could offer the service to forward some of the money for you. I’d really like to buy more services for my GNU systems, but currently I lack attractive offers. If we could make it the social norm to voluntarily pay for Free Software, that would be a real success.