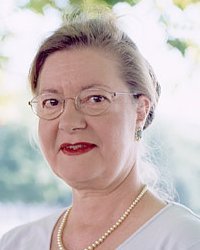 Anne Østergaard is a veteran of the Free Software community, and attended the first Open Source Days, back in 1998. She holds a Law Degree from The University of Copenhagen, Denmark, and after a decade in government service, international organisations, and private enterprise, she has become a devoted Free Software advocate. Her interests lie in the long-term strategic issues of Free Software; in the social, legal, research, and economic areas of our global society. A former Vice Chairman at GNOME, she’s heavily involved in political lobbying, and has been fighting for changes in software patents and copyright for a number of years.

Chris Woolfrey: As somebody who’s been involved with the implementation of Free Software at government level, tell me about the developments in policy, as you’ve seen them, in recent years.

It was a big and not-too-promising looking task at the beginning. I thought that it would be near impossible to explain to the members of parliaments in Europe, and to the general public, just how dangerous software patents are for innovation. It took a very long time until the main newspapers in Denmark and other countries were starting to write about software patents, but the ball was rolling. With the help of friendly mailing lists, both public and non-public, it became clear to me that with the infrastructure that the Free Software community offered, anyone who is dedicated and willing to respect the ethical rules of group collaboration could join in and join forces.

My friends and I all learned so much in the process. For me and many others the patent battle was a case story that demonstrated to us that a critical mass of dedicated persons from all the European countries can have significant political influence when fighting for better regulations for our society. Now, under the latest European Treaty, Official Journal of the European Union C 115/21 Article 11, a group of one million people from different member states can ask the European Commission to take up a specific topic to initiate or change legislation. It has not yet been decided what exactly the conditions are, but Green Peace has already been knocking on the European Commission’s door.

CW: And groups like the FSFE are knocking on the door, too.

AØ: There’s a question that the FSFE need to think about, and that’s “How Can Software Freedom Fighters be the First Movers to use the Citizens Rights Initiative?” We, the FSFE community, have the infrastructure to organize such citizens’ initiatives. The new European Treaty states that broad consultations should be carried out to ensure that the Union’s actions are coherent and transparent. The concerned parties can ask for a public consultation, or simply send a letter to the European Commission or the European Parliament to state their position and to be heard.

Using these new citizens’ rights are a challenge to us, because we need to spend a lot of time finding out about all the steps in the political decision making process. But I know of many people who would rather be part of only the creative process. To those I would like to say this: think of the political and legislative process as creative; one can learn much from participating in this process alone.

CW: How do you think Free Software will develop in the political sphere in future?

AØ: We have seen that documentation and knowledge sharing in the form of case stories, presentations, or consultations etc., can be helpful when you want to convince the government in your country. We have seen from these results of openly sharing knowledge that ideas and inspiration are spreading rapidly from country to country and over the continents. Right at this moment we are seeing that large countries in the world have the opportunity to do things right from the start.

Take, for example, the 2020 FLOSS Roadmap, which says that “In light of the considerable resources of the BRIC Countries (Brasil, Russia, India, and China), in light of the aspirations and proven abilities of many other countries to make intellectual capital a valuable global resource and a viable basis of commercial services, and in light of the enormous changes occurring both in the world itself and our collective and individual worldviews, the 2020 FLOSS Roadmap suggests how Free / Open Source Software can be used to transform ICT from yet another unsustainable hold-over from 20th century economics into a viable, valuable solution for 21st century challenges”.

Many other countries are on their way. Recently the Cenatic Foundation in Spain has issued a very informative Report on the International Status of Open Source Software 2010. It is a long report and well worth reading.

Of course, it took 10 years of fighting to avoid software patents in Europe in the first place. The battle is still ongoing. Luckily even the U.S (Public Patent Foundation) and the U.N. World Intellectual Property Organisation (WIPO) are involved. However, we need international legislation as Free Software travels fast and knows no boundaries.

CW: If it travels fast then the decision making of government might not be the best ground for it to flourish; given your experience, is this top-down legislative approach best?

AØ: Experience shows that it is best to have a real need for any new legislation, and to know if there is such a need; a bottom-up approach is clearly the best starting point. But without acceptance and adoption by governments there will not be any sustainable results, because companies are rightfully reluctant to make investments in an unclear situation. This is why the smallest unit of freedom, the individual Fellowship Member, or the equivalent in other freedom commons, is so important: only together are we strong enough to successfully continue our ongoing battle, maintaining the freedoms we have gained and to go on fighting for those freedom rights, we still need in a modern democratic and global world.

Smaller or bigger national or regional groups that share the same goal are our most important representatives when it comes to convincing governments. It takes an understanding of all the nuances of respective cultures to get the message across in the right manner, else it risks being rejected. Like language barriers, cultural barriers are important to acknowledge; wrong approaches could harm or block your efforts before the argument is heard. After all we must not forget that human beings are making decisions based on their inner feelings on what would serve their own agenda best.

CW: If that’s how people make decisions, how best can we help others to enter into the argument?

AØ: When these questions are asked we tend to point to our educational systems. But school systems are very different from place to place. I think it is up to us to think of ways to spread the message of not only Software Freedom rights, but also personal freedom rights in our local communities, as the personal freedom rights are the back bone of freedom. Until we have spread the fundamental freedoms of Free Software further there is little chance that we can make individuals understand the importance of being in control of your own life, and being the one to decide from case to case with whom you want to share information on matters you consider to be of a private nature.

Take Facebook. For most young people it is important to be seen, to have many friends and to be popular. This is why social platforms such as Facebook have become so popular. However, the wider perspective, that Facebook’s members are giving away important personal information and thus making themselves into a product to be sold to private companies, is not so obvious to a vast number of the website’s users. And when important politicians are on Facebook it gives a signal to people that it’s OK to be there. But don’t forget that politicians want to be exposed to get re-elected, and marketing departments of companies wants you to buy their products. To be in control it is safer to be able to remove things that you’ve written in a social forum that are no longer relevant or suitable.

And there is also the debate about Cloud Computing. Until there is a real possibility for fair competition, and this means that there must be a a secure right to get your own content back, it is a risky thing to base your business on. In his essay “Declouding freedom: reclaiming servers, services and data”, Philippe Aigrain is clearly describing why the open cloud movement is falling short of addressing some important challenges facing user autonomy and capabilities. As Aigrain comments, “The open cloud movement will become one of those activities whose very business rests upon enabling customers to leave it.”

We need a legal framework to ensure effective protection for network neutrality that ensures equitable treatment of decentralized Web services by prohibiting and sanctioning discrimination against protocols, applications, sources and contents. But we also need community and policy; to invest in the development of decentralized, user-controlled, free software-based Web services for all essential social/collaborative applications and promote their usage.

So called “intellectual property” rights are causing problems for free access to knowledge. In my opinion, developed countries have an obligation to share with developing countries so that these countries are able to play on a level playing field in the not too distant future, and without having to pay someone for content that has already been published on the internet.

Having access to the internet is taken for granted by many of us. Many people have only had this privilege of searching for information on the internet for less than ten years and are still not very familiar with how this modern infrastructure is constructed, and is functioning. Let us not forget that several millions of people haven’t even had the chance to use ICT yet. We are living in times where we are expected to make use of electronic self service systems by our governments; systems of an often non-free, and less mature and user friendly nature. If around 30% of a population have severe problems, our governments have a problem.