Maybe you have already heard about XMPP client for Android – “Xabber”, which is unfortunately proprietary.

Recently the company have declared that in case if they will get 50k followers on twitter the source code for their application will be opened and apparently released under GPL.

It is disputable whether such “viral marketing” is good for Free Software movement, but interested people can join this effort to Free another Android application by following Xabber twitter.

On Tuesday Richard Stallman was giving his speech about Free Software in Dresden Technical university.

FSFE activists could not miss such opportunity to promote Free Software, so they took a train to the capital of Saxony and had a lot of fun! 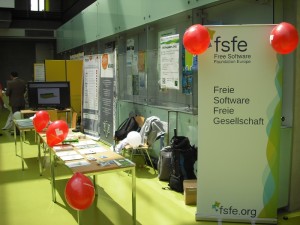 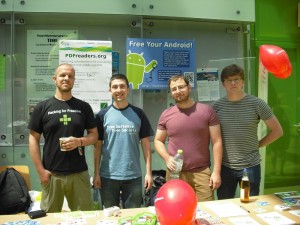 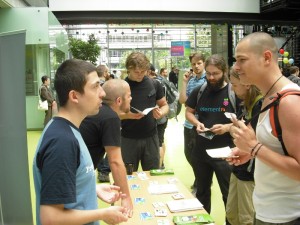 On the 10th of July Russian Sections of Wikipedia stopped its services for one day in the protest against proposed legal bill which can introduce censorship to Russian sector of internet. The protests were joined by Livejournal, biggest russian search engine Yandex as well as popular Russian social network vk, The bill hearing will take place in Russian parliament on the 11th of July.

Internet, as a mean of unrestricted and uncensored communication, has changed tactics in political struggle. Recent years have shown how it  can create threat to information monopoly of authoritarian regimes all over the world.

Maybe, you  have heard about protests against unfair elections in Russia this year. In the situation of almost total state monopoly on traditional media, such as TV, Radio and press, internet became sole possibility  for people to criticize the state authorities, share evidence of wide spread abuse of power and coordinate protests. 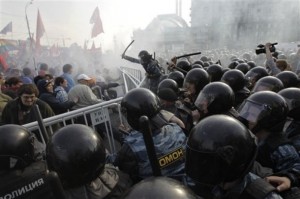 This year already became remarkable for the highest protest activity in Russia from the time of Soviet Union dissolution. You can read more about them here.

As a result Russian officials became really worried about such extensive loophole in the new media “iron curtain”. Their answer was old fashioned attempt of censorship under the disguise of children protection.

The new legal act introduces amendments to the current law which will establish system of filtering websites and black list of banned and blocked Internet resources.

General overview of the proposed amendments (In Russian)

According to the proposed act any Internet resource  can be put in the unitary register for the websites containing information forbidden for dissemination on the territory of Russian Federation,  which will result in immediate and instant deletion or restriction of the access to it.  The decision is made solely by state authority. Appellation of such a decision is possible only through state courts.

Considering current level of democracy and state influence over the court system in Russia, such measures will probably result in further restrictions imposed on the freedom of speech and information. They can be aimed to further suppress protest activity.

Update. The Law was passed by Russian parliament with exclusion of “information which can motivate children to perform actions harmful for their health” category.

Free Software opens up a lot of possibilities to everyone.

Now you can even try DIY underwater exploration, as Free underwater robots are becoming accessible to everyone. 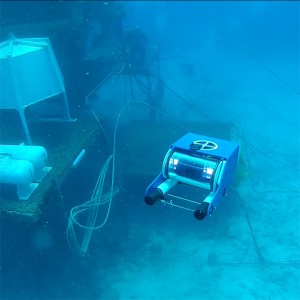 On the picture you can see OpenRov in its working environment.

“OpenROV is an open source underwater robot for exploration and education and is based on the Open Source/ Open Hardware principles”.

The whole project was started by one person in order to explore underwater cave which was nearby his house.

The robot can be assembled from easy accessible off the shelf parts and it can operate for 1 hour and dive to the depth of 100 m.

I think it is a perfect example of the community development approach, as OpenRov was developed on the basis of cooperation and contribution of many people.

Additional information you can find on: