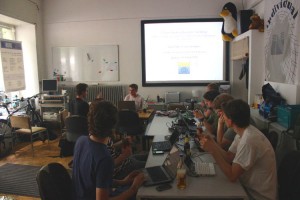 Given that these have been the first workshops that I have ever organised, I’m quite happy with the outcome. Here is a list of thoughts that occured to me during and after these events, which will hopefully help me in the future to provide a better experience to any attendees. They are written in third person, as if I was talking to my former self who was then preparing the first workshop:

These are mostly personal thoughts. Of course there are lots more that could be improved. In future talks and workshops I’ll try and improve as many areas as possible, even though I’m far from being a proper public speaker. Though, is that what computer scientists are for?

Well, all I can say is that it has been a blast! Never a week had gone by so fast.

Amongst other stuff I’ll be doing here, we are planning on doing at least one F-Droid workshop. Seems like there are quite a few people interested.

Quite recently I joined the F-Droid team in packaging FLOSS applications for the Android OS and, quite frankly, it’s been a delight. Not only do they welcome new participants gladly, but they also encourage you to help the project in any way you so wish to. Adding new applications, fixing non-working build recipes, or just by updating any application that might need it – these tasks are quite entertaining and can make your day when they come out and appear as updates on your own phone.

Were you to be interested, you can drop by at #fdroid on freenode 🙂

It has been a long time since the Catalan government last invested in Free Software for its use in the public environment, more specifically schools and public administrations as a start. Since 2007 there hadn’t been much progress in this area. It may be due to various reasons, but that’s not what matters – what’s important is that we have to bring software and information freedom back into the table.

A new Catalan parliament has been formed this last month. Amongst other things, this means that we have a second chance to show why is people’s freedom important here. Not only is it economically and socially effective, but it is also a right that has been taken from people for decades. Schools should no longer be paying for Microsoft licenses, nor should any other part of our public infrastructure.

That is mainly why we will attend a meeting with one Parliament member from one of the two parties in power, Esquerra Republicana de Catalunya, so that we can start communication with them and begin working together. There will be more news once we have more information about it.

The Fellowship Local group in Barcelona is quickly building up. Besides that, the workshop project is starting to take shape – We will he having our first test-run session this Sunday the 28th of October.

It has been just a few days here in the FSFE, but things look promising.

My plans are related to bringing the Catalan team back to life, and hopefully the Spanish one along with it as well. But much is yet to be done.

I’ll keep this blog up to date if my memory behaves.